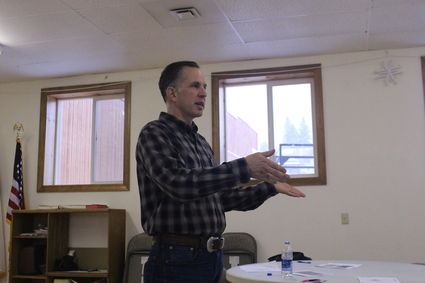 The mountain. The pyramid. The Sanders County Commissioners have heard many nicknames for the mound of gravel that now sits at the site of the new Thompson Falls transfer station.

Last fall, the first phase of the project was completed, which created a large platform on which the transfer site will be built. Sanders County Commissioner Tony Cox spoke to the Thompson Falls Chamber of Commerce last week to provide updates on and details of the project.

The new transfer station will include a building which residents will drive in to deposit their trash. The garbage will be dumped on the floor and then moved into a trailer. A tunnel under the building will put the trailer at ground level with the floor of the transfer station building. That, as well as adding compactors, will allow the county to get more garbage into each load. The county will contract with Republic Services to haul the trash to Missoula. Cox said that the county now hauls non-typical items itself, including metal and batteries, and he noted that the county recycles what it can as long as it is profitable to do so.

The new site will include three pits (two for wood and one for metal) separate from the main building. Cox said trash from Noxon, Trout Creek and Heron will continue to be brought to Thompson Falls for transport to Missoula. He said that Hot Springs and Dixon currently have other arrangements for trash collection; Hot Springs collects fees from residents and ships its trash to Missoula and Dixon works with Lake County and hauls trash to Missoula. The Plains transfer site will also have a compactor added with the new project so that trash will be hauled directly to Missoula from Plains, instead of the current process in which the trash from Plains is first hauled to Thompson Falls.

The county last year discontinued paper and plastic recycling due to rising costs, but still accepts some cardboard and aluminum cans. Yard waste and wood is collected at the various transfer sites in the county and burned, but then the ash must be hauled away.

"We are always looking at ways to start recycling," the commissioner said. "It's the right thing to do, if it's profitable."

According to Cox the county solid waste budget is tight. He stated that the department operates on just over $834,000 a year, with 12 employees and "some very old equipment." Cox said the department is self-sustaining on the money they have. The solid waste revenue, aside from anything received through selling recyclable materials, is charged by unit. A unit is 2.12 tons, and the county researches and works with local trash collectors to determine how many units to charge different businesses or residence types. The taxes per unit are $125, and Cox said that fee hasn't changed in 16 years. For example, a residence is charged one unit per year, a 1-bedroom apartment half a unit, and nursing home 10 units. The county then charges fees for disposing of tires, appliances with Freon, non-typical household waste, and even dead animals.

Cox said that the county will probably propose a rate increase at some point this year. He said it costs about $33 per ton to have Republic Services haul the county's trash, and that the cost goes up each year. "I hope people understand our predicament."

Cox gave a history of the early 1990s when state and federal governments enacted new regulations for dumps and landfills. The county looked at options back then and settled on a transfer site on a property next to Thompson River Lumber (TRL) that was owned by that company. The county leased the property until 2017. TRL then asked the county to relocate the transfer station but continued to extend the lease with the county while commissioners and solid waste staff worked to find a new, suitable location.

The county purchased 30 acres along Highway 200 just east of Thompson Falls for the new site. Cox said that they reviewed several properties. "It wasn't easy to find a new location." Great West Engineering evaluated available properties and the needs of the county before they settled on the new property. Cox said that about 10 acres was needed for the transfer site, so the 30 acres allows the county to have additional property for future use. He said one factor that carried weight when choosing a property was the distance to neighbors.

The county also tried to find a property that had a hill on it. The site purchased is relatively flat, which is why the mound of gravel was built last fall. Cox said that surveyors are monitoring the mound for settling to make sure that a stable foundation is set when construction begins. He noted that having water at the transfer site is an issue at this point, but that the county is looking at ways to provide water to the transfer site, possibly by connecting to the Salish Shores system. He said that not only would that be good for the transfer station, but it would also help other businesses and residences in the area.

Cox said the new Thompson Falls transfer station will be state of the art for solid waste. "It will look nice and we will work to keep it that way."