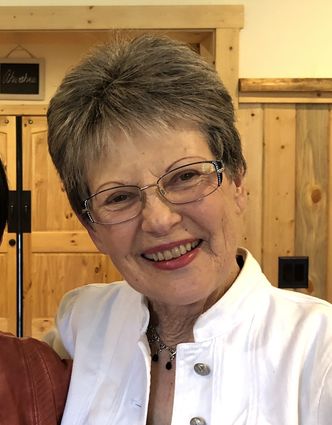 Jean Marie Worrell passed away, surrounded by family at her home in Thompson Falls, Montana on May 30th.  She had been battling cancer for the last 15 years.

Jean was born the second child of Archie and Georgette Shelp on Jan 12, 1941 in Carmel, California.  Soon after she was born the family moved to Marina, California, where she attended school.  She graduated from Monterey High School in 1958.

Over 49 years ago, she entered into a marriage with her lifetime partner Bob Worrell.  Together they shared many adventures and raised three children.  As the kids grew up, everything with Jean and Bob was a family affair.  There was nothing they did that didn't include the kids.  They supported the kids through many years of sports events, fishing and camping trips and anything else the kids showed a passion for.

In their later years they showed the same enthusiasm for the grandkids.  Taking them on grand adventures including fishing trips, camping trips and road trips around the northwest gave their grandkids memories that will last a lifetime.  One summer they put on the "Thompson Falls Pioneer Days" to teach the kids outdoor skills.

Jean was a very skilled gardener and loved her time digging in the dirt.  When the family lived in Aberdeen, Washington, her gardens were included in tours by different organizations.  Her vegetable gardens in Thompson Falls were something to be admired.  They spent many hours working in the garden all the while giving Bob "direction" on what to do.  Whatever they did worked well because the final product was a thing of beauty.

It didn't seem to matter the season, Jean was a fabulous hostess. Her and Bob put on many parties that were the talk of the town.  No matter if it was a work party, Christmas party or a neighborhood party in Thompson Falls, they were always perfect.  She would put in hours in the kitchen preparing gourmet dishes for the events.  When the garden would come on she would constantly search for new ways to prepare her fresh vegetables.

In 2000, after a search of the northwest, Jean and Bob settled on Thompson Falls as the place they wanted to retire.  She was instrumental in the design and building of their dream home on the Clark Fork River.   She volunteered at the Thompson Falls Public Library and spearheaded fundraising efforts to help the community.

Their place on the river was truly Jean's paradise.  During her last years, when her battle with cancer was running out, all she wanted was to be home.  Bob would do everything in his power to get her home as soon as her medical procedures would end in Spokane.

Jean is survived by her loving husband Bob;  children Ron Nicklas and his wife Tori of Hayden Lake, Idaho, Linda Nicklas and her wife Lisa of Montesano, Washington, and son John Worrell of Coeur d'Alene, Idaho.  She leaves eightloving grandkids and four great-grandkids.  She also leaves behind sisters Doris and Pat along with brother Jim.  She was proceeded in death by her brother John.

A celebration of life will be held at the Clark Fork Valley Elks Lodge 2519 Industrial Way Thompson Falls, Montana, on Wednesday, June 5, at 3 p.m.  Donations may be made to the Thompson Falls Public Library in her name, P.O. Box 337, Thompson Falls, MT 59873.