FAIREST OF THEM ALL 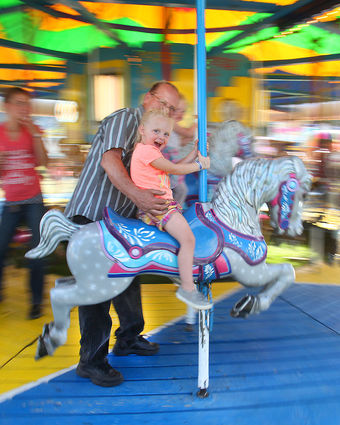 FUN TIME WITH GRAMPS – Two-year-old Eden Davis, grandson of Plains resident Prentiss Campbell smiles at the crowd while on the carousel at the Sanders County Fair.

Animals, animals and horsepower – the kind found in engines – are the three biggest draws to the Sanders County Fair. Fair Commission Chairman Randy Woods said people come to see the 4-H animals, the rodeo, and the demolition derby.

"I said it was going to be the greatest show on earth and it was," added Woods, who joined the fair board late last year. "Sales were up, attendance was up, and we provided the best entertainment in the Northwest," he said shortly after driving a tractor to smooth out the main arena for the fair's first lawn mower races Sunday afternoon. There's no way of knowing how many people attended the four-day festivities because it's one of the few fairs in the state that has free admission, but the grounds were packed, especially Saturday when Woods guessed there might have been over 5,000 people in attendance. Twelve hundred people attended Friday's rodeo and Saturday's rodeo was almost a sellout with 2,102 in the stands, said fair manager Melissa Cady, who took over earlier this year.

"Numbers for rodeo were the highest they have been in years. We had the top 15 bull riders here Thursday and several Friday as well and NFR bulls," said Cady. "We have one of the top stock contractors in the PRCA hands down and they bring the top athletes to Plains. You do not get to see animals like this in a typical small town. Every year we see bucking horses and bulls that you normally can only see at the NFR," she added.

Attendance for the bull riding Thursday was 700. During a break in the competition, nearly 20 kids signed up for the mutton busting contest. Some went only a few feet; one fell off as the sheep left the pen, but when the competition dust was settled, it was 5-year-old Braeden Allen of Plains who went the farthest, fetching 90 points and winning a special rodeo buckle, a poster and a carnival ride pass. Second place went to Reece Cummings, 7, of Plains with an 85-point ride. Sanders County Commissioner Glen Magera, who coordinated the contest, decided to also have mutton busting during a break in Saturday's rodeo. Fourteen kids competed, but he didn't have a record of who won.

Another big draw at the fair was Paradise Amusements, who had 19 rides and included six kids rides and 14 games, said Monica Dowis, manager for the Coeur d'Alene carnival. Rides were $1 each on Thursday evening. However, Dowis said that even though there wasn't a big crowd for the "Locals Night" they might do it again next year.

More than 20 food vendors – including three new ones – and 54 commercial vendors were spread across the grounds throughout the week, some coming from as far away as Texas and New York. "The fair was absolutely amazing. Several food vendors reported they sold more on Friday and Saturday than they had in the past years," said Cady.

"Commercial vendors were happy and looking forward to next year. We had a commercial vendor that will be donating a very special item for next year's Tuff Enough to Wear Pink night," she added. The manager added an incentive for the food vendors with a people's choice for the best vendor. The blue ribbon went to Manny's Mom Tacos of Polson.

The fair had 1,544 entries in the open class competition – 390 in the arts and crafts and photography division, 2 in the parade, 419 culinary arts entries, 89 sewing and needlework, 24 livestock, 33 in the poultry and rabbit division, 329 horticulture and 258 floriculture, according to Elizabeth Riffle, who headed the culinary arts, arts and crafts and photography divisions. The fair paid out $4,290 for 858 blue ribbons. Riffle said the fair receives cash and gift donations from individuals and businesses in Sanders County for the best of show and best in division winners, but she didn't have the amount for this year at this time.

Riffle was particularly impressed with the metal work of Plains resident Aurora Peacock, who took a blue ribbon, Best of Show and Best of Division for her anglerfish metal lamp. The 1.5-foot long lamp was comprised of more than 100 pieces of metal, from tiny nuts and bolts to large saw blades with doorknob eyes. She found all the materials at yard sales and used a nightlight bulb at the mouth to simulate a luminescent organ that the fish uses to attract prey. Peacock said she taught herself how to weld only a couple months ago and it took her about two weeks to finish the project. She also took blue ribbons with her metal rattlesnake and a dream catcher and a red ribbon with her metal sunflower, which was made from tractor parts.

Though the flower entry numbers were slightly down, judge Jim Sadler said there were a lot of quality pieces. He said the largest class was the marigolds this year. Sadler has been a judge at the Sanders County Fair for 15 years and he normally judges around nine shows a year. It took him nearly four hours to finish judging.

There were also some unique animal entries in open class. Malia Murray, the poultry barn superintendent, said they had 16 birds in the open class competition, including an Icelandic chicken. She was told there are only about 3,000 worldwide. Murray also had a mother Indian blue peacock and her five chicks brought in by 16-year-old Chloe French.

"People love them; they're not a common bird at the fair and it's fun to have them here, said Murray. The peacocks were not confined at her parents' Paradise property and it took her nearly an entire day to round them all up for the fair. French also brought in 13 baby chicks that hatched Thursday morning. Darin King of Paradise brought in a beehive behind glass connected to a tube in a hole in the building wall for the bees to come and go. After someone sprayed some of the bees, a sign had to be displayed saying they were "friendly bees." 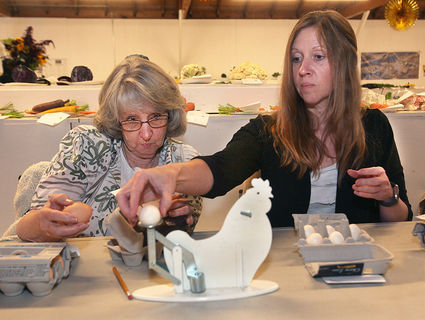 EGG WEIGHT – Candy Fisher of Thompson Falls (left) weighs an egg in the open class egg competition while her mother, Pat Ingraham, gets ready for the next one.

Doug Horner, the rabbit barn superintendent, was pleased to see a lion head rabbit in the open class competition. It's the first one he's seen during his three years as superintendent. Horner's daughter, Vanessa, a member of the Trout Creek Mavericks 4-H club, took the grand champion honor in the rabbit senior division. A mother and daughter team from Polson had 12 of the 25 open class rabbits.

For one Paradise man, the fair wasn't about competition. Bobby Mayes set up his antique farm engines and showed an assortment of antique tools, the oldest a fence stretcher dating to 1895. One of the biggest draws for the 80-year-old Mayes was his 1930s stationary hay bailer, which he converted to an aluminum pop can crusher.

This year's fair was a big success, said Sanders County Sheriff Tom Rummel, who was on the grounds every day. Woods said they're already working on ideas for next year.