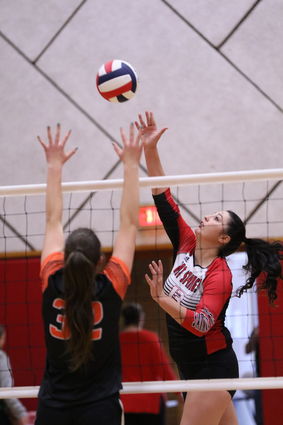 And so concludes one of the most successful volleyball seasons in Hot Springs High School history.

Coach Alisha Pablo and her Savage Heat netters wrapped up one of the best campaigns in the annals of Hot Springs volleyball by placing a very respectable fourth in the Western C divisional tournament in Churchill, fast outside of Manhattan, last weekend.

Along the way in Churchill, the Heat beat and eliminated two teams before finally being eliminated themselves, and lost to only the first and second place teams in the tourney, champion Manhattan Christian and runners-up Charlo. Since only two teams move on, the Eagles and the Vikings will represent the Western C at this week's State C tournament, part of the Montana All-Class tourney, in Bozeman.

"What a season it was! This was such a great group of girls," Pablo said. "So driven, competitive, tough and supportive of each other. The only losses we had in the post season were to the two teams headed to state, and that says something about this team, too."

Pablo has seen lots of teams come and go during her time coaching in Hot Springs but this group will now always hold a special place in her heart.

"I'm so proud of them. To make it to divisionals is always exciting, but to make a statement by winning two matches and knocking out some teams, that takes talent," she said. "I hope these girls and their fans realize what a team they were. They will be a team I will speak highly of the rest of my life."

The Heat opened the tournament with a 25-10, 25-16, 25-13 loss to eventual divisional champion Manhattan Christian in the first match of the tournament Thursday and then had to wait until Friday morning to play again. The Heat certainly got their money's worth with a full day of action Friday.

Katelyn Christensen led the Savage Heat against Manhattan with five kills, an ace, eight digs and six blocks, and Sydney Jackson passed out 11 assists. Eliana Kuperus had 15 kills and a block for the Eagle and Taylor Devries was good for 30 assists.

Back on court Friday, first against Valley Christian the Savage Heat took down the Valley girls 26-24, 25-14, 25-9 to earn another loser-out match with Philipsburg.

The Heat and the Lady Vikings ended up being very good for each other in the post season, as they played four tough matches in the last two weeks, pushing each other to get better each time out. Hot Springs was the only District 14C team to defeat Charlo in a match this season, in the undefeated match in the conference tourney a week earlier.

"I'm not going to discount Charlo and their trip to state," Pablo said, "but we were not playing our best volleyball against them Friday. We had more to give it just wasn't happening for us."

Christensen and Cannon had seven kills each in the season-ending match with Charlo, Sydney Jackson had 14 assists and two aces, Gray 12 digs and Christensen seven blocks. Carlee Fryberger put down 20 kills for Charlo, Kassidi Cox and Connor Fryberger hit 20 assists each and Destiny Manuel had 32 digs.

Pablo will miss this special group of Lady Savage Heat next year. "I will miss our core group of seniors, we are losing some pretty big positions," she said of Cannon, Gray and the Jackson twins. "I know there will be options for us with kids we have coming back, but we will really miss these seniors."