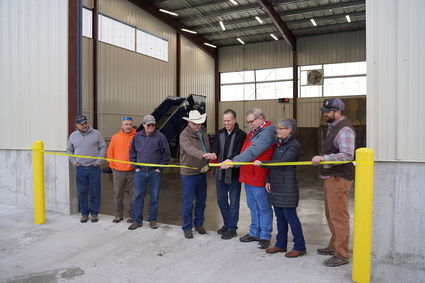 The Sanders County Commissioners commemorated the new solid waste transfer station on Tuesday with a ribbon cutting ceremony at the new facility east of Thompson Falls.

"This is the premiere site in Montana for a community of our size," commissioner Tony Cox said just before the ceremony, which was also attended by representatives of the offices of Sen. Steve Daines and Rep. Greg Gianforte.

Cox said the site, which cost almost $5 million, is more user friendly and efficient and "is something that will work for decades to come for the people of Sanders County."

Solid Waste Supervisor Jason Peterson said that the construction was officially completed on Tuesday, and he hopes the facility will be open by next week. Sanders County is adding additional operation hours at the Thompson Falls site due to the increased use. The Thompson Falls site will be open Wednesdays, Thursdays and Saturdays from 9 a.m. to 5 p.m., and Sundays from 11 a.m. to 5 p.m.

The contractor for the project was St. Clair Construction out of Alberton. "We appreciate being here," said owner Ollie St. Clair. He noted that they had local people working on the project. "It's been a really good project."

Great West Engineering worked with the county on the project, which was funded through the USDA Rural Development program. Bob Church with Great West Engineering attended the ribbon cutting ceremony, stating that the facility will serve the area for 40-plus years and efficiencies included in the project will help cut operation costs. "We're really proud of this project," Church said.

While Cox noted that the county has been working on the project for four or five years, construction began last fall with a large gravel platform being built. Now, a large steel building sits atop that platform. In the building is a pit in which trucks will drive in order to transport trash for the county. Residents using the transfer station will have different recessed bins outside of the building in which to dump their trash. There is a bin for household trash, a bin for metal, one for wood and one for construction and demolition materials. Residents will be directed to those bins by the transfer station attendant, who will direct them. Vehicles will back up to the bins and deposit trash below. Those bins will then be managed by the solid waste staff.