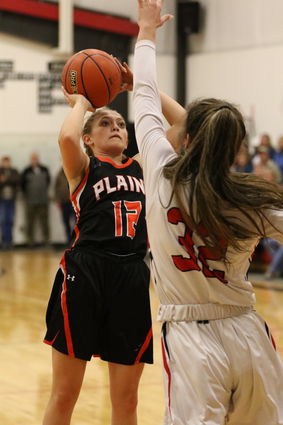 INTENT ON THE BASKET - Plains sophomore Kylah Standeford gets off a shot in Hot Springs Friday.

Eddie Fultz's big day is coming and it has nothing to do with basketball.

Then again, Fultz's next really big day – the day his first child is born to he and his wife Rheanna, which is officially due this Friday – could very well involve basketball, if that is what is going on precisely at the time of the big moment. And it could happen anytime this week or next, totally dependent on when the little Fultz child decides to make his or her grand appearance.

With the Trotters hosting Two Eagle River Thursday and visiting Noxon Friday, Fultz is not sure if he will be available to coach either game or both, it all hinges on what baby Fultz decides to do.

"It could happen tonight, you never know," Fultz said Monday from Plains. "Rheanna's due date is Friday so things could get interesting. I won't be there if it happens though, I do know that."

Although Fultz's baby is almost full-term now, the basketball season is still a long ways from being over, and Fultz is keeping his eye on the ball in that regard as well.

"I don't think we have played our best basketball yet," he said. "We had a few games earlier this season where I thought we were approaching what we are capable of, but I have been looking for that signature moment when it all falls together."

Fultz thought his Trotters almost reached the hoop nirvana he was seeking in the game with St. Regis.

"I felt we finally broke out a little bit," he said, "we are showing flashes of what we could be like. Now it's just a matter of developing consistency along with that."

A freshman, Curry went off for a game and career high 27 points in the game with Hot Springs. Curry included two 3-pointers and eight of 10 free throw shooting to post her stunning game total.