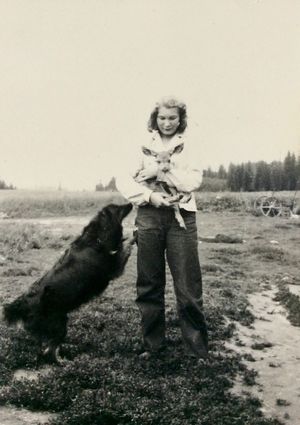 Ione Hall Moore died peacefully April 29, 2020. Her eldest daughter and only grandchild were by her bedside. Her son and daughter-in-law, and youngest daughter were present by video phone.

Ione died just two days after her 87th birthday. Her eldest daughter and granddaughter were there in person to celebrate and the rest of the family joined via conference call. According to Ione, her long-dead family dog attended too.

Ione was born in 1933 to Guy and Nina Hall in Whitepine, Montana, during the hardest year of the Great Depression. Her father paid for the cost of delivering her into the world by helping the town doctor build his barn. Two local brothers fell in love with two local sisters and while Ione was an only child, her aunt and uncle had a house full of kids that were as good as siblings to Ione, genetically speaking. Ione said she was 6 years old before she realized she didn't have an extra set of parents. The families grew up on neighboring farms and the kids attended Little Beaver School together.

Ione went on to study at Washington State University but left early when she married James Garland Moore and had three children. Early in their marriage, the couple moved to Moran Prairie where Ione founded the Tory Aire Kennels and set out to raise Airedale puppies, and her three kids. As a young mother, her children remember that no question went unanswered and no childhood interest went unrewarded.

Ione moved from Stanford with two of her kids to a small apartment in Palo Alto and with little formal work experience, set out to find a job. She eventually accepted a position with Pacific Bell where she worked for 30 years. Upon retirement, she returned to Spokane to be near her cousins where she lived happily until health concerns prompted her kids to move her to Seattle. She lived overlooking Lake Washington near her eldest daughter for 10 years.

Spunky and feisty, clear spoken and true to herself, Ione will be remembered for her abundant perspective and her generous spirit. Her combination of fearless practicality will remain an inspiration.

A graveside service will be held in Whitepine Cemetery where she will be laid to rest with three generations of her relatives.

A visitation will be held at Hazen and Jaegaer in Spokane, Washington, Thursday, May 14 from 1:30 p.m. to 5:30 p.m. PDT. A graveside memorial will follow in Whitepine, Montana, Friday, May 15, at noon MDT.