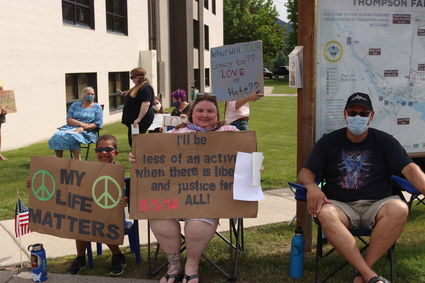 RAISING THEIR VOICES - The Harbel family (from left, Declan, Kathryn and Neil) of Thompson Falls display signs in front of the courthouse on Friday.

Locals gathered in front of the Sanders County Courthouse in Thompson Falls for a vigil honoring those who they believe have lost their lives to racism in the United States. On Friday Kathryn Harbel, along with her young son Declan and her husband Neil, welcomed about 30 people to the vigil that she organized. They sat on the side of the road from 3-5:30 p.m. with signs to share their message.

Kathryn and Neil decided to do the protest because her son is partially African American, and she is scared for his future. "I worry about the future of my son, who is black and Native American," said Neil.

Kathryn organized the event by posting something on Facebook. She said that she was met with a lot a criticism from the community.

"As a white person, sometimes it is hard to understand," said Kathryn about the feeling of racism. "Sometimes we have biases that we don't even realize." Kathryn was pleasantly surprised by how many people showed up to the protest.

According to the Harbels, their protest was a way to do something to incite change. "We are here remembering the lives lost due to racist thoughts and backgrounds," said Neil. He went on to say, "even in small-town America there are people willing to stand up."