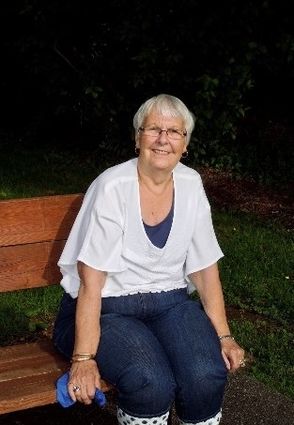 Nancy was the only child of Ethel (Branch) and James Marckley. Born in Marshall, Michigan, she spent her childhood there graduating from high school and then marrying William Wischer. Together they had six children, three boys and three girls. They lived in Grand Rapids and Detroit, Michigan until 1976 at which time Nancy and her four youngest children moved to Southern California. Nancy later moved to Oxnard, California where she loved living near the beach. That is where she met Don Hansen who she later married. They enjoyed traveling the west in their RV, visiting family and enjoying the sights.

Don and Nancy moved to Scotts Valley, California, where they were able to enjoy the beach while living in the foothills of the Santa Cruz Mountains. After retiring they moved to Trout Creek, Montana where they built a beautiful home on the Clark Fork River. When Montana winters became too much for her, they started wintering in Tucson, Arizona with her son Dan.

Nancy loved sitting on the back deck of their Montana home watching the river and wildlife. She also loved the companionship of her Shih Tzu dogs so much so that she adopted two new puppies just months ago. Nancy was an avid seamstress making many dresses and costumes for her granddaughters. She loved to quilt, supplying family with many beautiful quilts until arthritis prevented her from doing so. Always needing to keep her hands busy she turned to coloring in books and on her tablet.

She was a collector of many things including every panda bear she ran into. She enjoyed gardening around their Montana house, always having an impeccable landscape. She loved to shop, knowing exactly what she liked. She also enjoyed sharing Disney characters with her granddaughters.

Nancy is preceded in death by her parents, her son Billy and her son-in-law Howard. She is survived by her husband Don, five children, Cathy Ryckman (two grandsons and four great-grandkids) of Fernandina Beach, Florida, Dian Hennienke (four grandsons and six great-grand kids) of Anderson, California, Beth Neiman of Las Vegas, Nevada, Dan Wischer of Tucson, Arizona, and Dave (Barb) Wischer (four granddaughters and one great-granddaughter) of Olympia, Washington. Nancy was blessed with a total of 10 grandchildren and 11 great-grandchildren.

There will be no service at this time due to current public health concerns.

The family would to extend a special thank you to Connie Duran for helping her through knee replacements, most recently last year and for offering Nancy her friendship.