CFVRC hosts its own Missoula Marathon 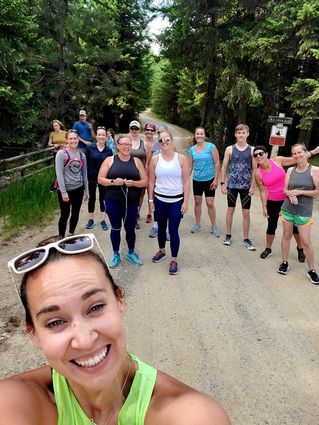 PRE-RACE SELFIE PLUS SOME - Whitney Tanner-Spurr takes a starting line picture during Saturday's Missoula Marathon in the Lynch Creek area north of Plains.

Not wanting to be denied their 2020 appearances in the Missoula Marathon, which like most every other sporting event so far this spring and summer has been canceled during the COVID-19 pandemic, 13 local runners from the Clark Fork Valley Running Club (CFVRC), ran the race virtually instead. The competitors lined up at 8 a.m., Saturday, on a course set up along country roads north of Plains in the Lynch Creek area.

Most of the runners, armed with Garmin wrist-watch devices to verify their times and distances, ran half-marathons, while one intrepid soul, Logan Naegeli went the whole distance, running his first full marathon ever.

Whitney Tanner-Spurr was the main driving force behind Saturday's local, virtual, feel-good version of the Missoula Marathon, which has become one of the biggest, most-anticipated runs in the country over the last several years.

This year's running may not have had the fanfare like normal in Missoula, but the scenery of Sanders County's hinterlands, and pleasant, cool early morning weather, made it an enjoyable running excursion for all involved. Our local version of the Missoula Marathon started at 8 a.m. on a forested road in the Upper Lynch Creek area.

"Whitney planned it, set the whole thing up," CFVC president Sarah Naegeli said, "and really did a great job with it. It was a beautiful course and great weather for running."

Naegeli said runners who had already signed up for the 2020 Missoula Marathon were given three options for refunding their entry fees this year – defer entry until 2021; donate the entry fee to a worthy cause; or run the race virtually – like these members of the die-hard CFVC did this past weekend.

"We have been training all along, trying to keep a six-foot distance between us as we ran," she said. "We decided that COVID-19 wasn't going to stop us from training, so why should it stop us from running the Missoula Marathon?"

Although Saturday's running of the marathon was it, the big road race of the year for many runners, Naegeli said a few other runners have arranged it on their own with Missoula officials, saying Floyd Searl completed his half-marathon a few weeks ago, and that Mike Lilly ran a full marathon Sunday. 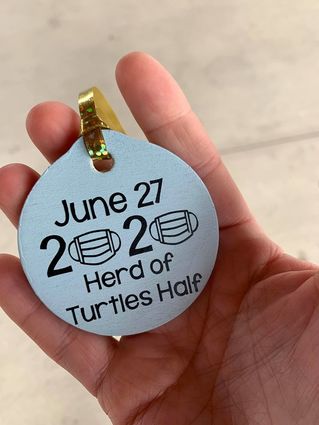 PROVIDING PROOF that they made it to the end of the race, CFVC members who made it to the finish were awarded these handsome "Herd of Turtles Half" medals.

Although final places are not yet determined due to the fluid nature of the competition this year, Naegeli said the brother-sister team of Justin and Haley Morgan had both posted impressive times in the half-marathon, which were still standing up to the competition early this week.

In related running news, Naegeli said Sarah Stover, who was one of the six Thompson Falls runners Saturday (there were seven from Plains), has set up a running program called the "Couch to 5K" and will be meeting at 8 p.m. each Monday evening for runs from the Thompson Falls High Bridge.

One can read all about Stover's Couch to 5K program, one that she was inspired to create by her life situation, on the Clark Fork Valley Running Club Facebook page. "Sarah has become quite the runner, has seen the benefits of it, and is now encouraging other people," Naegeli said. "We really appreciate her and what she is doing."

Naegeli said the Huckleberry Run, normally held in association with the Huckleberry Festival, which has been canceled, is still being planned, and that details for that will be announced in the coming weeks.