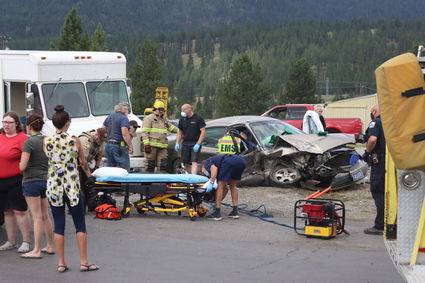 Emergency personnel respond to a two-vehicle accident near Harvest Foods last Friday. According to witnesses, a car was traveling west on Highway 200 and turning into the Harvest Foods parking lot when they collided with an oncoming truck. First reponders used the jaws of life to get the passenger out of the car. The passenger was transported by ambulance to Clark Fork Valley Hospital. No other injuries were reported. Traffic in and out of the store's parking lot was affected by the accident for about an hour. Sanders County Sheriff's deputies, Thompson Falls City Police, Thompson Falls Ambulance and Thompson Falls Fire Department responded to the scene.