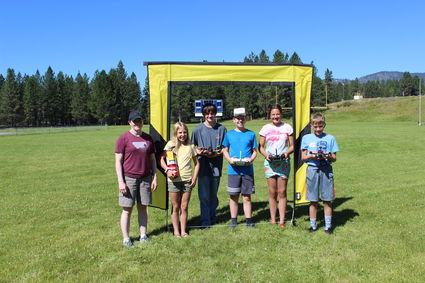 A small group of kids in Thompson Falls have spent the last two weeks learning how to operate and fly drones at a newly established drone camp. Taught by Doree Thilmony, a science teacher at the Thompson Falls School District, the group of young drone operators have been meeting at the high school football field to practice various techniques as they fly racing drones through different obstacle courses.

"This is their second day of flying, and so far, they're doing great," Thilmony said. In its first year of running, the summer drone camp is being offered with the help of Montana's GEAR UP grant. Due to the social distancing circumstances of COVID-19, the capacity of the camp had to be limited. "It's probably going to be the only camp we get to do this summer because of the coronavirus," said Annalise Fairbank, one of the camp attendees. Fairbank said she's enjoyed being able to get out and do something with her summer, and building the drones has been her favorite part.

Thilmony explained this camp is an educational program that was built for the children to learn as much as they can about the operating systems and how the drones fly. "They actually got to build the drones themselves. I've been teaching them about ethical operations, how drones work, and what drones are used for," Thilmony said. The group has been practicing on a racing drone that operates on three different modes: altitude, angle and acrobat mode.

"It's a lot harder to fly the racing drones, they are a lot harder to control. You have to have quick instincts," Cael Thilmony said. Solveig Nygaard, another aspiring drone operator said she was happy when they were finally able to get out of the classroom and onto the field. "I've always wanted to learn about drones, and I thought it would be fun," Nygaard said. Her brother, Theo, has been enjoying some much-needed socializing with his friends. "I like the flying part, but hanging out with everyone has been fun. They have all been pretty cool," he said.

Along with building the drones, Thilmony has been instructing the group about local laws and regulations; with a heavy emphasis on safety. The group carries with them a fire extinguisher, as well as a 10-pound bag of sand, should the drones or batteries catch on fire.

The kids aren't the only ones learning new skills in this camp. Thilmony herself has also taken several lessons away from this experience. "You always want to have back ups of everything. Batteries, props, motors, and screws. Crashing is a part of learning." It's also one of Ethan Geisbush's favorite parts of the camp. "I love flying the drones, and I love crashing the drones," he stated.

While this is only an intro course, Thilmony hopes this camp will continue again next summer. She has done her own preparation and attended drones racing courses, in order to fully understand and give the kids the best experience possible. "This has been great so far, I am enjoying my Sunday mornings with them. I just love teaching these guys."