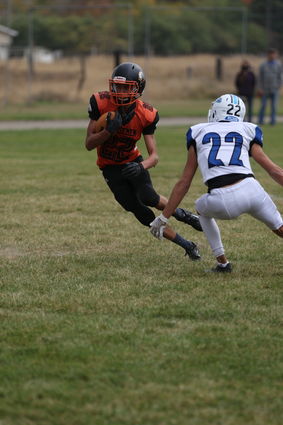 The undermanned Horsemen didn't have the horses to hang with the Mountain Cats.

Down four Horsemen due to COVID-19 quarantine protocols, the Plains football team lost 46-0 to Clark Fork in Superior in 8-Man action Saturday.

Plains coach Eddie Fultz knew the Horsemen could be in trouble when he was able to suit up only 12 players in Superior, a group he called "three seniors and a bunch of freshmen."

"We went in with only 12 players, so I knew we would have the deck stacked against us," he said. "The kids we had did play hard but it was a lot to overcome."

Fultz said the Horsemen moved the ball fairly well at times and did gain scoring position several times, but again had trouble finishing their drives. "That has kind of been our story the last few games," he said. "We really need to start finishing drives better."

Clark Fork improved to 6-2 with the win while the Horsemen fell to 2-5 with the loss.

Fultz and the Horsemen will complete season play hosting Seeley-Swan Friday in Plains. Fultz said the game time has been moved to 2 p.m. due to a shortage of referees.