View from the Sideline 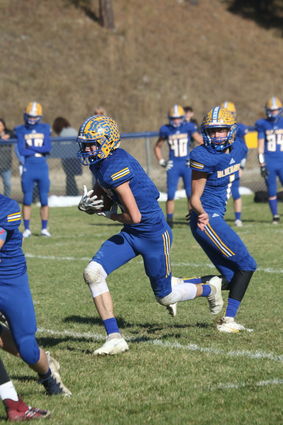 Missoula Sentinel and Billings West started the last best prep championship weekend of 2020 off in the Class AA title game on Wendy's Field at Daylis Stadium in Billings Friday night.

The Sentinel Spartans put an exclamation point on an unbeaten campaign by defeating the Billings West Golden Bears 24-15. It is Sentinel's first AA football crown in 38 years.

The next day, Saturday in Drummond, the cooperative between Drummond and Philipsburg, the Flint Creek Titans capped an unbeaten season with a 44-6 win over Scobey/Opheim in the Montana 8-Man championship game. The Scobey/Opheim Spartans had defeated Thompson Falls 40-24 in Scobey in the playoff quarterfinals.

Coach Jared Koskela and his Blue Hawks finished the season 9-1 with that loss. Due to a quirk in scheduling, Thompson Falls and Flint Creek did not play this season, and Flint Creek was awarded the Western Conference's top seed due to a tiebreaker formula after both teams went undefeated in conference play during the regular season.

Koskela and Hawk fans everywhere are left wondering how the playoffs would have went down had Thompson Falls received the west's top seed into the playoffs instead of the Titans.

The other football championship decided Saturday was in Fairfield as the Eagles hosted the Manhattan/Manhattan Christian Tigers in the Class B title game, and the Tigers won 23-6 to cap a 12-0 season and claim the program's first state crown ever.

Speaking of the Hawks and the Titans and what might have been this year, let's look at what actually happened between these two teams in 2019 when they were on each other's regular season schedule. Just like in 2020, the two teams were in a battle for supremacy in the Western 8-Man conference.

Flint Creek, the two-time defending State 8-Man champions at that time, came into the game with a 3-1 record and were ranked No. 4 entering the game, while Thompson Falls was also 3-1 but unranked in the State 8-Man power poll.

It was a rainy night on Sept. 27, 2019, when coach Mike Cutler and his 3-1 Flint Creek crew arrived in Thompson Falls and, by the time the Hawks were through, the Titans were beaten, battered and sore after taking a 64-24 whipping from Thompson Falls.

All-State quarterback/linebacker Trey Fisher led the Hawks to the win, rushing for 209 yards on 20 carries and scoring an amazing six touchdowns. Abusing the Flint Creek defense at will all night long, Koskela's Hawks piled up 433 yards of rushing offense on the normally defensive Titans.

On defense, Fisher also led the charge in bottling up Flint Creek's star player Kade Cutler, who could not get the Titan offense moving well until the game was decided.

Now sporting a 44-4 record for his four-year coaching career, Mike Cutler may have suffered the worst loss of his coaching career that rainy night in Thompson Falls when the Hawks slammed the door on the Titans. And since he is now retiring to watch son Kade play for Montana State the next several years, coach Cutler may never avenge that painful loss to coach Koskela and the Hawks.

Just goes to show, there is sometimes justice in sports, one just needs to remember whose side they are on. One thing for certain though, no one will ever be able to take away Thompson Falls' 64-24 win over the Titans in 2019.

Perhaps crestfallen by that embarrassing loss, the Titans went on to lose in the playoffs and did not win the State championship for the only time in Cutler's coaching career there. The Titans won State titles in 2017 and 2018, and added the 2020 crown last week (as described earlier).

Victims of the situation, that's what we are, all of us – the year 2020 has not been fair to sports, to its players, its coaches and its fans. It hasn't been fair to anybody. 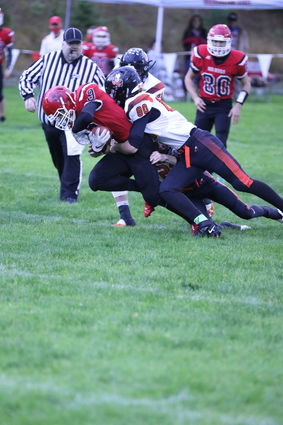 NOXON RED DEVIL senior Josh Baldwin is tackled by the White Sulphur Springs Hornets in an early-season game at Noxon. Baldwin senior, Jared Wedbley (No. 80 to the right) and junior Cade VanVleet were the Red Devils named to the Western Conference and State 6-Man all-star teams announced earlier this month.

The bright side of the darkness of 2020 is that it did give high school sports a bigger stage in the media, as they had the only sports to cover since most college programs had suspended or otherwise delayed competition. The western Montana television stations and daily newspapers covered high school sports better this year because they had no college sports to report on, and that may have been the one hidden bonus of the pandemic.

But as bad as 2020 has been for sports, it has been just as bad and often times worse in every other walk of life. Think about the fact that over one-quarter of a million Americans have already perished due to COVID-19, and then consider the fact that that number will only get much bigger in the coming months for some perspective.

Hopefully, 2020 will be a one-shot wonder and we will never have to go through anything like this again but, the truth of the matter is, we are not really done with this COVID-19 pandemic yet. In fact, it almost seems like we are still smack dab in the middle of it as a second wave now surges through the heartland of our country.

It will be interesting to see what the current climb in infection numbers will mean for Montana sports, and for Montana in general, in the next few months. Until then, we will remain victims of circumstance, continuing to look for ways through this difficult time.