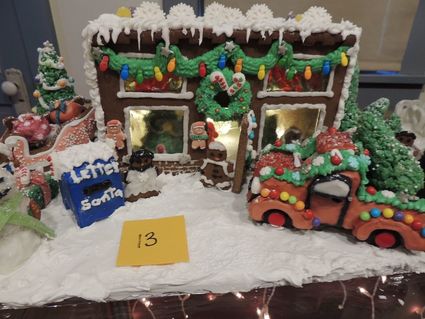 Beautiful homes, trains, ornate churches, a toy shop and Christmas gifts all made of one of America's favorite holiday treat - gingerbread! The Christmas season simply wouldn't be complete without the annual display and competition.

Decorated with gum drops, chocolate bars, red licorice and lots of fondant, the creations were on display at the Old Jail Museum's 23rd Annual Gingerbread Event.

The creations are no easy feat. Some bakers have been working on their entries for months, and the impressive structures told of their efforts. Participants may spend months planning their structures and then cringe with every pothole as they drive their creations to the show. Open to talented individuals, families, and organizations, this year, a near-record thirty gingerbread structures competed in five categories. "Some will start very early turning their ideas into structures.

"They start baking, they start creating. They have their fallouts. They rebuild until they have their fallouts again, and until they get it right," organizers stated. "Even the kids are stepping up their game. They said they're watching the cooking shows, the Great British Baking Contest. When these kids move up, they're going to create some over-the-top displays. They're doing a great job."

The Thompson Falls kindergarten classes decorated 30 gingerbread men that were also on display. These giant cookies were baked by Mona Jacobson, who has volunteered to bake hundreds of the cookies over the years.

Guests enjoyed browsing the gingerbread entries and voting was by people's choice. The Auntie A Award of $100 went to Aimee Foyil of Thompson Falls. 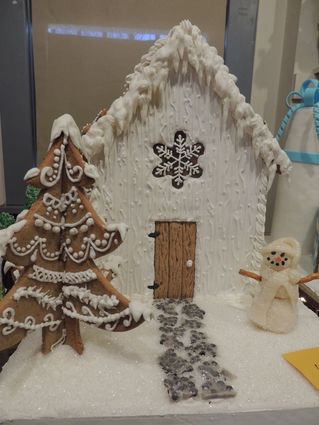 THE AUNTIE A AWARD at the annual gingerbread contest went to Aimee Foyil of Thompson Falls.

Foyil also won in 2019. Winners in other categories were Celeste Curry, adult; Laura Minemyer, teen; Annalise Fairbank, youth; Neviah Black, child; Rachel Fairbank family in the family category. There was intense competition, and some of the winners were decided by a vote or two, contest organizers stated.

The gingerbread houses were on display Saturday. The display was free and open to the public as this the is Historical Society's annual Christmas card to the community as a thank you for their support.

"We think everyone did a really fantastic job this year," organizers stated in a press release. "It's really hard to pick favorite. Visitors all found something they fell in love with."

Plans are already under way for the 24th Gingerbread Contest in 2021. The chosen theme is "Christmas is Coming!"