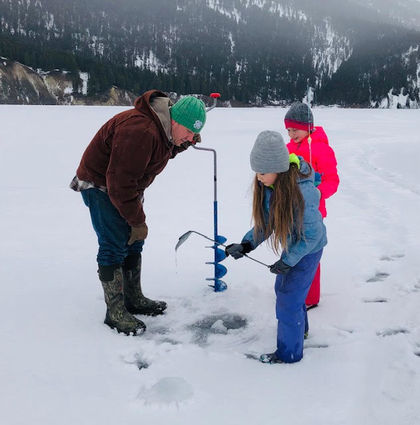 FISHING 4-HERS Kendall (center) and Cooper Spurr try their hands at ice fishing with their dad Steve.

Many community members are aware of the average activities of the 4-H program, where youth learn about trades and farm animals. However, few know about the 4-H Outdoor Adventures Project, which gives young people opportunities to get outdoors. One such outing was hosted by John Haun, Bob Thornhill and Juli Thurston on Eddy Flats Sunday. With a cold snap finally bringing in some cold weather, the trio organized a couple of ice fishing trips, one of which was the one this last weekend. The other was held at Triangle Pond a few weeks prior in late January.

Haun picked the location, saying he has been fishing there since he was young. He reported before the trip that in his experience, the location is a consistent place to catch fish. However, Sunday's experience was less than stellar. "The bite was really slow, and it was really disappointing, but the kids had fun." According to Haun and Thurston, the children enjoyed their time and had a snowball fight. Haun said the ice was slushy, and the group thought there might be high winds, but fortunately the air was calm. Haun reported that he tied the tents down just in case. He and Thornhill arrived at 6 a.m. to prepare for the children and to set up equipment. Haun said that showing up early was key to reserving a good space. The children and their families showed up at 1 p.m. and left around 4 p.m. Even with all the preparation and scouting, Haun said they only caught about four fish all day, which was not what Haun was expecting. 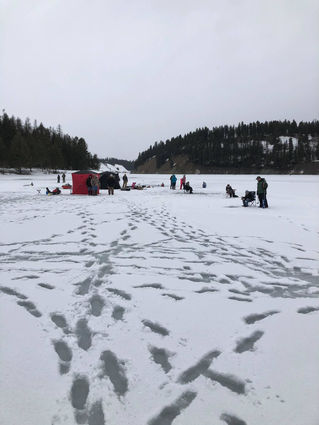 Thurston handled the planning and organization of the event, sending out a group email to all the 4-H families and club leaders in the county. Thurston said that the program gives youth the opportunity to go do things like ice fishing, hiking, snowshoeing, trapping, tracking and more. The group also hosts summer activities for the children as well. "We just try to come up with fun things we can do to get kids outside," said Thurston. The event last weekend drew about a dozen 4-H participants and their families from all over the county. "They just had a blast," added Thurston, also mentioning the snowball fight. Thurston said that Haun was disappointed that the kids did not catch more fish. However, at Triangle Pond they had caught quite a few fish.

There are seven 4-H clubs in the county, with 30-40 adult leaders and about 130-150 participating kids aged between 5 and 18. The group can be found on Facebook under the name Sanders County 4-H Outdoor Adventure Project. More information can be found by contacting the Sanders County Extension Office at 827-6934 or by visiting their website, sanders.msuextension.org/4h.html. The membership cost for youth aged 5-7 is $5, and any above that is $15. Thurston said that there are no additional costs for activities like fishing. The group plans to go skiing March 6 at Blacktail Ski Resort.