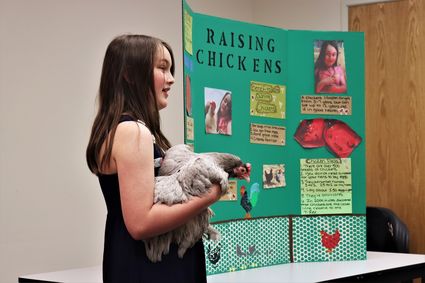 Lauren Hudson holds her chicken Abby as she presents during the 4-H Communications Day on Sunday. This was Hudson's first 4-H presentation.

Youths from across the county gathered in the Clark Fork Professional Building in Thompson Falls on Sunday to participate in 4-H Communications Day. Participants were split into two divisions. The senior division included six youths ages 14-19 and the junior division included eight youths ages 9-13. Each participant was given 15 minutes to set up, present and take down their demonstration before it would be judged. Judging the juniors were Ray Brown and Sarah Naegeli, and judging the seniors were Karen Dwyer and Kate Baxter. Presentations were judged on the participant's introduction, understanding of the material, voice, presentation of the material, summary and more.

Participants chose topics that are important to them and that they know well, said Juli Thurston, the county extension and 4-H agent. Topics ranged from baking cookies to discussing personality types. One participant, 10-year-old Lauren Hudson, a member of the Trout Creek Mavericks, explained how to raise chickens. She brought in one of her chickens, named Abby, and presented a board with pictures and facts. Hudson then proceeded to explain the various intricacies of bringing up the fowl. Hudson said she prepared in about an hour and was only a little nervous before presenting. During her presentation, Hudson said, "There are an average of one person to every eight chickens, but at my house it is more like one to 20-something."

Another participant, 15-year-old Sydnee Wilson from the Whitepine Happy Workers, said this was her seventh year in 4-H. Wilson's presentation was on breeding horses and artificial insemination. Wilson said she had the idea when she was performing an ultrasound on her mare, Hope, who they recently artificially inseminated. "It was actually a two-year process," she explained. In her presentation, Wilson covered choosing a mare and a stallion, the insemination process, caring for the mother while she is pregnant and caring for the foal. Hope is currently under watch to give birth, which Wilson is very excited about. "It could happen any day now, so we are watching her at all hours," said Wilson. Wilson won second place at Sanders County 4-H Communications Day.

Both divisions gave presentations simultaneously in two adjacent rooms, between 1 p.m. and 3 p.m. Winners in the junior division were awarded scholarships to 4-H camp, while senior winners received scholarships to 4-H congress. Senior winners all compete at the state level with their presentations. Junior winners were Katherine Wrobleski in first place, Melodie Cook in second place, Noah Scharfe in third place and Sophia LaFriniere in fourth place. Senior winners were Claire Wrobleski in first place, Sydnee Wilson in second place, Vanessa Horner in third place and Mikiah Cook in fourth place. More information on 4-H in the county can be found on the MSU Extension 4-H website at sanders.msuextension.org.