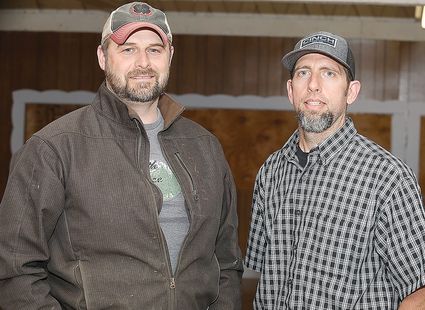 NEW MEMBERS – Brian Crain of Plains and Ted Forkum of Heron are the newest members of the Sanders County Fair Commission.

The Sanders County Fair Commission welcomed its two newest members last week and took time during the two-hour meeting at the pavilion to fill them in on recent activities and upcoming events.

Brian Crain of Plains and Ted Forkum of Heron were selected by the county commissioners to fill vacancies by Roberta Smith of Thompson Falls and Milanna Shear of Hot Springs.

"The reason I wanted to be a board member on the fair commission is that I grew up going to the Sanders County Fair, and know how important it is to this community, and I want to do my part in keeping the fair an enjoyable experience," said the 45-year-old Crain, who's been the Plains branch manager for First Security Bank for eight years. Crain was born and raised in Plains and is a 1994 Plains High School graduate.

The three commissioners interviewed two candidates for each position. Commissioner Carol Brooker said they were looking for a Hot Springs resident to fill Shear's spot, but no one from there applied. She said they spent about 45 minutes on each applicant. "I think these guys are really going to be active and a big help," said Randy Woods, fair commission chairman.

Forkum said he wanted to join the board because he thought it would be a great way to give back to the community. Forkum, age 40, moved to Heron about a year ago and has a farrier business. "My specific goal for the fairgrounds is to see it be used as much as possible for all sorts of events, not just the fair and rodeo," he said. "The fair board, 4-H club and members, and volunteers are doing a great job getting ready for the 2021 season. There is a great variety of events planned this year."

One upcoming event at the fairgrounds is a monster truck rally the weekend of June 19 and 20. Checkered Flag Promotions of Bridgeport, Texas, which ran the rally last year, failed to pay the county $3,000 for use of the arena. Ed Beckley, the event promoter, felt he would have had more people in attendance had the county commissioners not scared people away people with their warning on Facebook to follow COVID-19 guidelines. Even though more than 1,200 people attended the rally, Beckley refused to pay. Melissa Cady, the fairgrounds manager, said this year's rally will be paid beforehand by Ricky Fowler, who drove the monster truck "Zilla" last year, and will be running the event this year with his own company, HyLite Real Entertainment.

The board last week also talked about ways to make the demolition derby a bigger fair event. Even though it's the biggest moneymaker in the fair each year, Woods feels it could be better and bring in more revenue for the county. He said they have 62 cars already signed up for this year's derby, called "Carnage on the Clark Fork." Woods also wants get more sponsorship, which would mean increased revenue.

This year, the board has hired the film crew Stirrin' Dirt of Utah for $3,000 to shoot the derby and have a live video feed on the Internet and give sponsors the chance to advertise to a wider market and get their product more visibility.

Meanwhile, Cady and her assistant, Hailey Coe, are working on annual contracts for food and commercial vendors for this year's fair. Cady said the contracts have been sent out with 20 returned so far. The Sanders County Concessions group, a nonprofit organization that usually has several booths, is unhappy with their rate increase and has yet to determine their participation.

Cady told the board she will be determining whether or not the rental rate fees of buildings, booths and grounds during non-fair times are standard. "The goal is to have our fairgrounds used year around," said Cady. It was also discussed if the fairgrounds would be interested in having junior high and high school rodeos, run by Tammy McAllister of Hot Springs. Woods said it might be something to consider in the future, but he doesn't believe the fairgrounds could handle it economically at this point. "We are equipped but at this time we will look at pursuing this in the future," said Cady.

Cady added that they will be looking for nominations for the annual community service award. The winner has a plaque at the fairgrounds flagpole and is the fairgrounds parade grand marshal.

Only one person from the general public showed up for the meeting and he expressed issues with the handicap parking situation in 2019. Handicap parking was at located in the back of the fairgrounds. Dave Wonder of Plains said it was tough getting his wife's wheelchair through the gravel and grass. He was told by fairgrounds staff that he couldn't drop off or pick up people near the entrance of the parking area. He said he wrote letters to the commissioners, but received no response. Cady told Wonder they are adding handicap spaces in the parking area in the park next to the fairgrounds and put six to eight spaces in the front. "Taking the bus from town and being dropped off is still a great option for anyone, as they are dropped off at the front gate," said Cady. 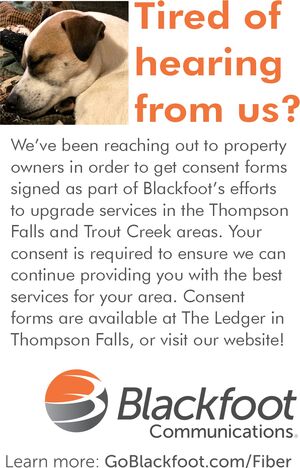