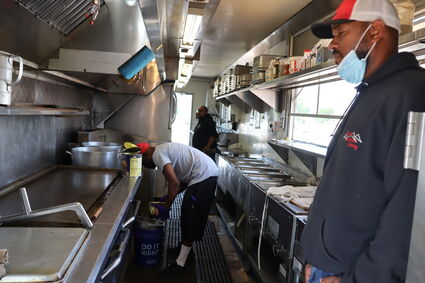 WHERE THE MAGIC HAPPENS – Thunder Road Catering manager James Davis, known as JD to his coworkers, led an impromptu tour of his company's operations, including the kitchen at the Thorne Creek fire camp last Friday.

Food, a shower and a safe place to sleep when not on the front lines; these are the basics emergency workers like wildland firefighters have a right to.

The Thorne Creek fire camp just southwest of Plains, more or less a tent city on steroids designed and built from the ground up to support the effort, has done all that and more for the firefighters and fire staff working on that stubborn fire for over seven weeks now.

Knowing that all their basic needs are met is a big thing for workers, especially those in high-risk professions like fighting fire in places that are usually far from home. And it turns out the ones serving the firefighters are doing so far, far from home too.

Supported by Thunder Mountain Catering out of Boise for food services and Welborn Aqua Haul Services from Buffalo, Wyoming, for the showers, the Thorne Creek fire camp was running like a fine-tuned firefighting machine last week, keeping upward of 400 people fed and clean as the work on the 38,000 acre-plus fire continued.

A dirty, demanding and sometimes dangerous job, firefighting is definitely not for everyone but it is everything for some; and those people deserve safe working conditions and some of the amenities of home when they come off the line.

"The Thunder Mountain catering crew is always friendly, greeting firefighters with a smile while dishing out incredible meals that everyone in fire camp looks forward to each day," public information officer Robin Bible, who arranged a camp tour for local media last week said. "The catering crew stays on the road serving incidents throughout the long fire season, spending time away from loved ones."

The Thunder Mountain catering manager at the Thorne Creek fire camp, James Davis, called JD by his coworkers, knows the drill well. Davis said this was his unit's fifth fire of the summer so far, and that he has been away from his home in Boise since the second week in June.

In his seventh season with Thunder Mountain, Davis said 2020 was also a very busy fire year for the company, mostly in Northern California. He said that between June 7 and November 21 of last year, he spent only two nights in his own bed in Boise.

Capable of feeding upwards of 2,500 people each day, Thunder Mountain usually travels with 20 to 40 employees to get food out, depending on the situation. Davis said he thought 21 or 22 were working in that effort on the Thorne Creek fire, and on supporting the nearby Boulder 2700 fire outside of Polson as well. He estimated that his unit was preparing and delivering about 500 meals at a time for breakfast, lunch and dinner for the Thorne Creek and Boulder 2700 fires by late last week.

Hot meals served at breakfast and dinner for Boulder 2700 were first placed in canisters to keep them fresh for the drive up to the Polson area each day.

Feeding firefighters is a big job as studies indicate that most firefighters, on an average need over 6,000 calories per day to "provide energy and nutrients that help sustain work output and maintain the function of the immune system," and to avoid energy deficit.

Keeping firefighters clean is another way of keeping them happy, and that's where Welborn Aqua Haul comes in at the Thorne Creek fire camp. Welborn's shower units feature individual, stainless steel shower rooms with stalls, which are cleaned out after each shower to maintain a clean environment for each person using the facility.

Josh Schaaf of Dillon, was managing Welborn's shower units in the Plains camp. Schaaf said Welborn responds to all kinds of emergency situations, like Thunder Mountain across the country if needed. 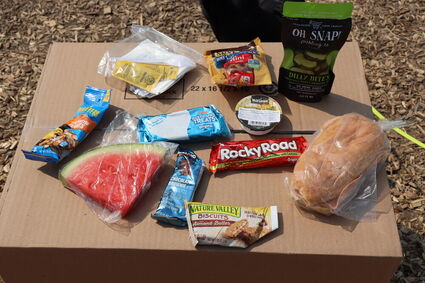 A WHOLE LOTTA FOOD is provided to firefighters to meet their daily intake needs as this sack lunch demonstrates. Studies indicate that the demanding work firefighters do requires upward of 6,000 calories a day to avoid an energy deficit in their diet.

"We also work in hurricane relief and other disaster situations," he said. "We even went to Nashville last year for a homeless relief incident."

Schaaf said that taking care of people properly helps them function better, no matter what the situation is. "It makes a big difference to people, to be able to take a shower, get clean and feel normal again," he said, "and we are glad to be able to help them to do that."

Unfortunately, Sanders County residents are becoming quite familiar with the fire-camp drill, and this particular piece of ground near Plains, which was once a hayfield, has served as base camp for several large fires over the past years including the Thompson River Complex in 2014, the Copper King fire in 2016 and most recently, the Sheep Gap fire in 2017.

One thing different about fire camp the past two years has been the ongoing COVID-19 pandemic, which has changed how caterers operate, including the packaging of meals, observing social distancing and eliminating common dining areas where crews used to normally congregate and eat.