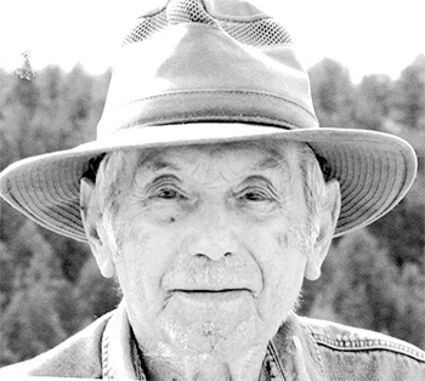 Richard was born 3 lbs. 13 oz. Given little chance of survival he was relinquished by his parents at birth and Ora Beller returned to Dixon, Montana, with Richard in a shoe box where she and Dick Beller raised him as their own. The Depression brought many jobs to the Beller's and young Richard; by the time he was 5, was running wild horses with his dad, Dick. At 16, he went west to Haugen logging camp, followed by guiding fall bear hunts in the Nine Mile just as WWII was staring down the country. He never completed his schooling.

Richard jumped a freight train at 17 to join his dad in the Bremerton shipyards. Not liking the sea, Richard joined the Army at 18 with a promise of Airborne, and headed off to Camp Roberts, California, on his way to Europe and the 82nd Airborne Division of WWII. Ultimately, the ARMY decided he could better serve in a gun battalion in Normandy, Ardennes, Rhineland and central Europe. Held captive twice for a short time by the Germans, he escaped only to be wounded by cannon shell shrapnel in October 1944. Healed up, he continued to serve until his honorable discharge in December 1945. Richard was very proud to be the recipient of the Purple Heart as well as receiving many honorable awards for his service.

Returning to Dixon after the war in the spring of 1947, he met Gabrielle Fink, a teacher on the Camas Prairie. Three months later they married in Thompson Falls. In 1958 they made their home in Plains on the Lower Lynch Creek ranch, raising cattle, working for Diehl Lumber, and compiling his life story, "Wild Horses Running."

They had three children which they made sure were educated. Rick (JoJean) Beller of Wasilla, Alaska, his son, grandson to Richard, Ryan Beller of North Dakota, Shelley Beller of Nampa, Idaho, and son John (Martha) Beller of Nampa, Idaho. John for the last two years has resided in Plains with Richard assisting in the care of the ranch and Richard. After 72 years of marriage, Gabrielle Fink Beller preceded Richard in death in 2019.

Thank you to all who stopped in to drink a cup of coffee and hear a story and to the ladies of Clark Fork Valley Hospice. A memorial celebration of life well lived, well known and with no regrets is to be held September 18 at Plains Cemetery at 11 a.m.