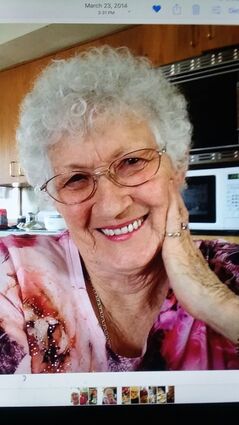 She was born to Ottillie and Al Leeson November 26, 1932, in Spokane, Washington. She married Arthur Vanek in 1949.

Mona was an accomplished woman. She always said you can do anything if you put your mind to it, and she lived that philosophy her entire life. She never did anything halfway. Always all in.

When she was in her early 20's she needed to learn to sew for her family, so she set about learning to sew by the Bishop method of sewing on a treadle sewing machine. She became an excellent seamstress. Making clothes tailor fit.

In her late 20s she decided she would like to write for the local paper, The Sanders County Ledger, typing on an ancient old typewriter. She did so for many years as well as writing articles for Grit magazine.

She was around 27 when she decided she wanted the job as secretary at the Noxon school, but you needed to know how to write in shorthand. So she taught herself how and secured the job.

At the age of 33 she became unable to work due to an injury and left her position at the school.

While recuperating she decided to teach herself to knit. That wasn't enough she also taught her self how to tatt and the fine art of hairpin lace.

In the late 1960s when portable cassette recorders came on the scene she bought herself one and set out to interview all of the "old timers" in the Noxon valley. Someday she said she was going to write a book about them.

She also was a photographer and not only took the pictures, but she learned how to develop them as well and had her own darkroom. She eventually also developed color photos.

When she was 55 her beloved husband had a heart attack. She was so moved and impressed by the Noxon ambulance crew that she became a first responder. And then on to an EMT. She remained in service for 17 years until her age forced her out, she was 72.

Still her passion was always writing. Factual writing. She wrote the three-volume set of books titled "Behind These Mountains." She published a documentary entitled Aunt Lena about the early Forest Service in the area. Her articles were published in many magazines and newspapers. She was very proud of getting an article in to the popular magazine "Chicken Soup." She won several writers awards.

She mastered everything she set her mind to, including belly dancing and cake decorating.

She was preceded in death by her parents, her husband Art Vanek, her son Stephen, and her granddaughter Rosalie Hill. She is survived by her son, Gary, and her daughter Annette Hill; her sister, Carol Kibbey; brother, Chet Leeson; grandchildren, Ray, Jason, and Travis Hill, Amie, Pepper, Aric and Tyler Vanek, Mike, Roy and Valerie Vanek; and numerous great-grandchildren. Love you, Mom.

A celebration of life service will be held at the Noxon Methodist Community Church in Noxon October 15, 2021, at 1 p.m. Mom always wanted everyone who came to her service to be happy, no tears, just a good time. So please come casual and help us enjoy her memory.