Clark Fork U15 chalks up a win 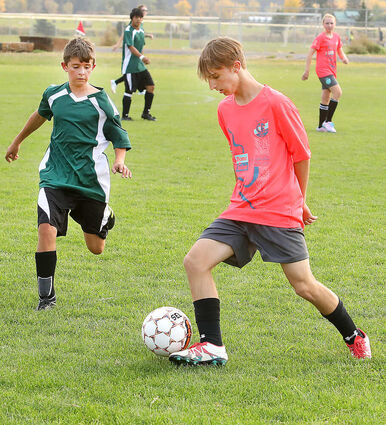 MANEUVERING AROUND – Clark Fork Soccer Alliance John Thurston makes his way around a Hamilton Christian Academy Lion before passing to a teammate.

The Clark Fork Alliance Soccer Club U15 coed team nabbed its second victory of the season with a triumph against the Hamilton Christian Academy Lion 6-2 last Tuesday at Amundson Sports Complex at Plains.

The Lions had only one loss prior to taking on Allen's team, but they were confident of another win. Clark Fork had other ideas and within five minutes of starting the game, Andrew Wrobleski of Plains put one into the net, assisted by Gunnar Gannarelli of Thompson Falls. Two minutes later, Wrobleski passed the ball to Theo Nygaard of Thompson Falls for the second score. The 15-year-old Nygaard did it again to end the first half 3-0. Keeper Tristan Allen, 12, had four saves in the first half, including one that was well over his head, but which he deflected, depriving the Lions from getting on the board.

During halftime, Lawyer had some of his team's players - Ava Lawyer, Maddie Madden, Claire Wrobleski, Anna Hefner, and Macy Scott - give the team an assessment of their playing of the first half.

The second half began with Clark Fork Alliance keeping up the pressure with Wrobleski finding his mark from 24 yards away and over the keeper's head to make it a 4-0 game. Allen soon passed one to Johnny Felix for the fifth point. The Lions then nabbed two points within minutes of each other. John Thurston then passed to Felix for the final point.

"We're a pretty good team," said Coach Allen, 19, who played youth soccer for eight years. This is his first year as coach. He enjoys coaching, but he sometimes wishes he were back on the field. Tuesday's win gave Clark Fork Alliance two victories and one loss. His team is composed of 15 players from Plains, Trout Creek, Thompson Falls, and St. Regis, including four girls. "We need to work on some technical skills," said Allen, "but we're on the brink of something great."