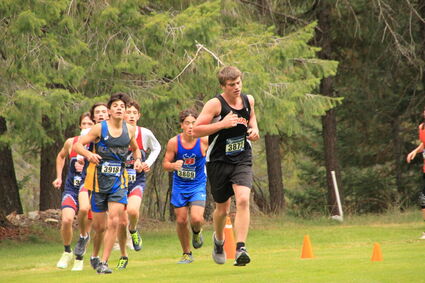 LEADING A PACK of runners through River's Bend Golf Course at the conference championship last week is Spur Ryan of Plains (right).

On a chilly 42-degree day at River's Bend Golf Course in Thompson Falls, cross country runners from Plains, Hot Springs, Thompson Falls and 13 other teams competed in the conference championship. With the sun tucked behind the clouds and the course in prime condition, the circumstances were perfect for long distance running according to Thompson Falls head coach Sarah Naegeli. With the perfect conditions and a season's worth of training under their belt, runners from each school performed admirably and numerous personal records were set.

The Thompson Falls team led by Coach Naegeli had a day to remember with three varsity runners finishing in the top 10 and receiving all-conference honors. For the girls, sophomore Faith Palmer finished in second place, recording a scorching time of 21 minutes, 51 seconds in the 5,000 meter race. Her time was a whopping 40 seconds better than her previous best time. Also beating her previous personal record by 40 seconds was junior Mollie Nichols who ran the course in 23:05, earning a ninth-place finish. Another noteworthy finisher for the Blue Hawk girls was senior Roni Hanks, who recorded her best time of the season (26:53).

"The girls team is up and coming and have steadily improved throughout the season. There's some great talent coming up through the program," Naegeli said of her varsity girls.

For the boys, senior Will Hyatt took fourth place and set a personal record of his own by blazing through the course in 17:17. Finishing just outside the top 10 was sophomore Cael Thilmony who finished 13th with a time of 18:30, another personal record. Other notable finishers (and personal record setters) for the Blue Hawks were Levi Meyers (19:25), Alessi Rolando (20:00), Will Hawkins (21:43) and Ben Croft (22:00). The combined effort resulted in a fourth-place team finish for the varsity boys.

Naegeli was particularly impressed with Hyatt. "Will's improvements have been amazing, especially since he's only in his second year," she stated. "I just wish I could have coached him for two more years."

The Thompson Falls Junior High team, coached by Sarah Stover, also posted impressive times in the 2-mile run including a number of personal records. The junior high team was highlighted by a fourth place finish in the boys race from Brock Ryan (12:35) and a second place finish in the girls race from Aubrey Baxter (14:21). Other notable finishes were turned in from Solveig Nygaard (14:21), Evan Lofthus (15:00, which was one of his best times according to coach Stover), Remmington Ryan (17:44) and Brooke Flemmer (20:53)

"I love coaching cross country," Stover said. "Running is my passion and having such an amazing team this year has made me excited for many more years to come. They all know that it is not how fast you run, just as long as you finish. I am proud of each and every one on the team."

In a milestone first season since 2015 for the Plains cross country team, coaches Jesse and Charity Jermyn couldn't have been happier with their team. The Jermyns were runners under the school's original cross country coach, Tim Brooker, and leaned on Brooker and his wife Carol for support and enthusiasm throughout the season.

The Plains squad was led by solid finishes from sophomore varsity boys Spur Ryan (20:21) and Brenden Vanderwall (2:.06). Sophomore Peyton Wasson turned in a strong time of 29:50 for Plains.

Coach Jesse Jermyn sees promise in the future of Plains cross country. "We couldn't ask for a better group of kids to kick us off. Peyton pushes through anything we throw at her without complaint. Brenden is easy going and will push the pace if I start to let up. Spur, our first homeschool athlete, brings energy to practice and competitions. This year has been a great start for the program and we're all looking to finish strong and grow over the next couple of years through adding more runners to the roster and starting a junior high program."

Hot Springs head coach Bethany White was in agreement that the River's Bend Golf Course was a great place to race for the conference championship, and her runners seemed to feel the same as they posted solid times in their respective events.

Sophomore Elijah Campbell finished his 5K race with a time of 24:54, while freshman Sasha Kifer was able to complete the course in 34:19. For the junior high team, Josh White turned in a time of 14:19 for his 2-mile run and Zoe Kifer finished in 16:53.

Coach White was thrilled with her young team's performance over the course of the season. "This team runs with a lot of heart and always leaves everything on the course."

Next up for the three teams will be the state meet in Missoula on Saturday, October 23. Hopefully the conditions will be as perfect for running as they were last week.