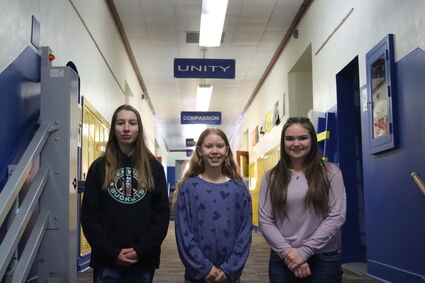 Elks Americanism Essay winners in the seventh and eighth grade division all were from Thompson Falls, including (from left) Aubrey Baxter, Arya Krick and Marley Neesvig.

"You need to care about your country because it is a free country," said Noxon sixth grader Jasmin Risch when asked about Americanism. Risch was the third-place winner for the 2021-2022 Sanders County portion of the nationwide Elks Americanism Essay Contest for the fifth and sixth grade division. The contest asked participants to write an essay that speaks to a certain patriotic theme. The theme this year was "What does it mean to love your country?"

Risch participated last year and plans to enter again the following year, saying English is one of her favorite subjects. "I didn't think I was going to win, but it felt good," Risch said. According to Jasmin's mother Pacey Risch, "We have a great sense of pride in our country." Pacey was a bridge crew engineer in the U.S. Army and explained that Jasmin saw some of the sacrifices her mother gave both while serving and after. Pacey believes this has contributed to her daughter's sense of patriotism.

All the winners had to draw upon similar patriotism to win, according to Doug Padden, Elks member and District Chairman of the Americanism Essay Contest, who spoke about the importance of the essay contest. He explained that it gets kids thinking about their home. The contest has two divisions, one for fifth and sixth grades and one for seventh and eighth grades.

The winners for the fifth and sixth grade division came from both ends of the county, with first place going to Jett Irgens from Noxon and second place going to Reese Meredith from Plains.

All three winners for the seventh and eighth grade division were from Thompson Falls. Marley Neesvig won first place. She also won at the county level last year and third place at the national level the same year. In second place was Arya Krick and in third place was Aubrey Baxter.

Baxter, 13, said her inspiration came from "just from living in Montana and getting to live in this kind of country," citing the wilderness. This was her first time entering the contest and said she would love to do it again. Though her favorite subject is math, and she would love to one day become an architect, she still values the lessons she has learned from the contest. "It's a good opportunity and it helps me to improve my writing skills."

The essays needed to be 300 words or less and participants were given between November and mid-December to write their entries. The Elks try to involve all the schools in their district. "Some teachers like to make it part of their curriculum," Padden said. The contest is competently voluntary, and students have a chance to be entered statewide if they place in the county. If they place there, they could see their essay compete across the nation. All essays that place first through third in the districts and then do the same in each state are entered into the national competition.

When the time comes for the contest, the National Elks Foundation comes up with the theme and it is sent out to all the Elks Lodges across America. This year Sanders County had about 30 participants, though Padden said he has seen as many as 50. In the end, there are six winners between the two divisions in the county.

The Clark Fork Valley Elks Lodge gives $100 to first-place winners in the county, $75 for second place and $50 for third place. For those who win state and national, there can be a lot more prize money, some of which comes from the local chapter, according to Padden. "It's just another one of the many good things the Elks do for this community," he added.