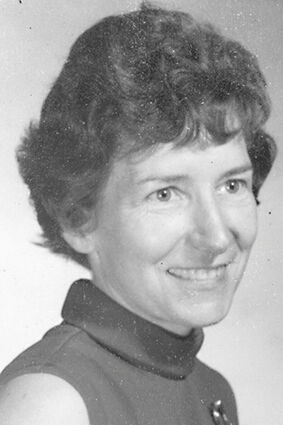 Mary Della (McLellan) Netz passed away August 11 in Albuquerque, New Mexico, after a long struggle with Parkinson's disease. She was 88.

Mary was born in 1934 in the small town of Sherman Station, Maine, the only daughter of Delmont and Mae (Garrity) McLellan. She grew up among the close family of her many aunts, uncles, and cousins. After high school she attended The Aroostook State Teachers College (now the University of Maine at Presque Isle) where she was crowned Beauty Queen in 1952.

The college held occasional sponsored dances and invited airmen from the nearby Presque Isle AFB to attend. It was at one of these dances where she met Alan Netz from New Mexico who was to become the love of her life.

They married in May of 1953 in Sherman Mills, Maine.

They lived in base housing which soon became a bit more cramped when their first son, Dana, was born. Alan separated from the Air Force and the family moved to the small community of White Rock, New Mexico, near his parents and sister. Their second son, Duane, was born shortly after.

They then moved to Albuquerque so that Alan could attend school. He soon found full-time work at the Sandia Laboratory. Steady work allowed them to buy a home where their daughter, Anne Marie, was born.

That home suddenly became too small, so Alan found an acre of land east of town in the Sandia Mountains where they built their home.

When the children were grown Mary decided to complete her education and enrolled at the University of New Mexico College of Education. After graduation she started work teaching second grade at San Antonito Elementary School where she worked for 20 years. She recalled that she was teaching the children of some of the children that she had taught years ago. In 1982 she was awarded the Teacher of the Year.

In 1986 she and Alan retired to tour the country in their motorhome. The east mountain area has grown over the years and, as they toured, they looked for a likely place to relocate to. They found it along the Clark Fork River in Thompson Falls, Montana. There they built their last home.

In 2010 Mary was diagnosed with Parkinson's disease.

In 2015 the love of her life passed away suddenly. She maintained independence for several years but became more dependent upon caregivers and family members over time. In 2021 she moved to Albuquerque to be closer to family.

She was predeceased by her parents, husband, daughter, and grandson. She is survived by her brother Bertrand (wife Carole) of Naples, Maine, and family; son Dana (wife Lynn) of Jemez Springs, New Mexico; son Duane (and wife Mary Beth) of Villa Grove, Colorado; son-in-law Grant Denton of Newport, Washington; five granddaughters; and 11 great-grandchildren.

Services were held August 27 at 1 p.m. at the Woodmark Assisted Living Center in Albuquerque.

There will be an additional memorial in Thompson Falls, Saturday, September 24, at Ainsworth Park at 1 p.m. Please contact Kris Anderson at [email protected] for further information.

Mary's favorite flower was the lilac. If you choose to not send flowers, then please consider a donation to the Parkinson's Foundation instead.