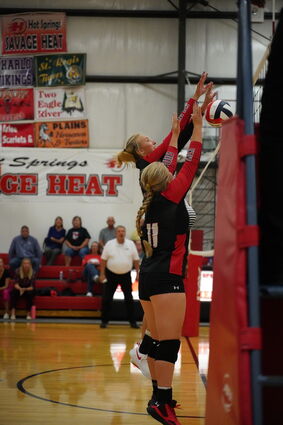 Lauryn Aldridge and Georgia Uski jump to block a ball against Charlo.

It was three up and then three down for the Savage Heat volleyball team last week as Hot Springs beat Two Eagle River in three sets Thursday and then lost to Charlo in three on Friday. Both contests were held in Hot Springs.

The Savage Heat served up enthusiasm and competition last week but came up short as they lost three straight to the Charlo Vikings.

Hot Spring hit the court strong as senior Lily Detienne kicked off the first set serving for three straight points before the Savage Heat's first side out of the game.

Josie Uski was on fire at the net with a series of kills as Hot Springs strengthened their lead to 8-3. The Vikings appeared to be just getting warmed up, however, as they began their rush and came back to tie and take the lead, finishing the first set 25-21 over the home team. 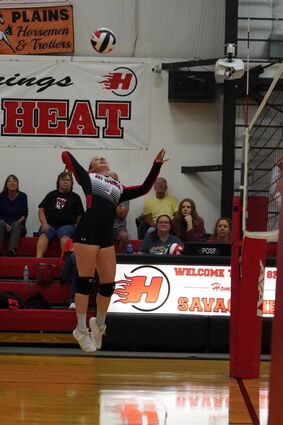 Hot Springs senior Josie Uski pulls back to hit the ball over the net against Charlo.

Charlo kept their momentum in the second set as they took a 7-2 lead and held Hot Springs throughout the matchup. The Savage Heat tried to come back from the deficit but ended up losing the second set 25-13 as Charlo took a 2-0 lead on the night.

The third and final set Charlo was on a mission, scoring seven in a row before Hot Springs had a chance to serve. The Savage Heat didn't go down without a fight, making some key plays and coming back to tie the third set at 12. From there the Savage Heat held on, keeping the game tied at 15, then 16, then 17, then 18 before Charlo snuck away with the lead and the 25-22 final score to seal the win Saturday. Against Charlo, Kara Christensen had 11 digs, Aldridge four kills and three blocks, and Brooke Jackson added three aces and nine set assists.