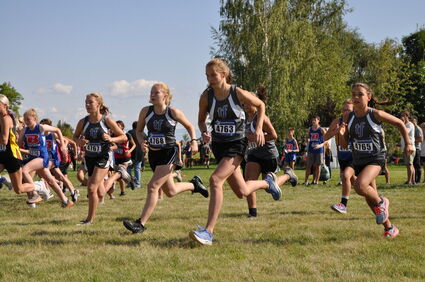 As the temperatures cool down, the competition is heating up for the Thompson Falls cross country team.

The junior and high school athletes traveled to the Flathead Invitational, run at Rebecca Farm last Friday. "This was a significantly larger and more competitive race than our last two," Coach Sarah Naegeli said. "The two-lap grass course has some rolling hills to make it interesting and a nice downhill to the finish.

Senior Ellie Baxter and junior Cael Thilmony each ran lifetime personal records at the race last week, with Baxter leading the Blue Hawk girls with a time of 21 minutes, 44 seconds, and Thilmony finishing in 18:25. "This was Ellie's first race for us, and she was ready to compete," Naegeli noted. "Cael was in the midst of the tight, jostling, elbowing packs of runners and held his own very well."

This was the first race of the season for Brock Ryan, who finished in 20:01. Naegeli said he looks to be a great competition. Other Hawks with personal records at Rebecca Farm included Blake Schusterman (22:33), Wesley Powers (24:07) and Jakob Molina (27:57), who each beat their personal bests by at least two minutes. "The improvements are what we like to see as they figure out their race pacing," Naegeli explained. 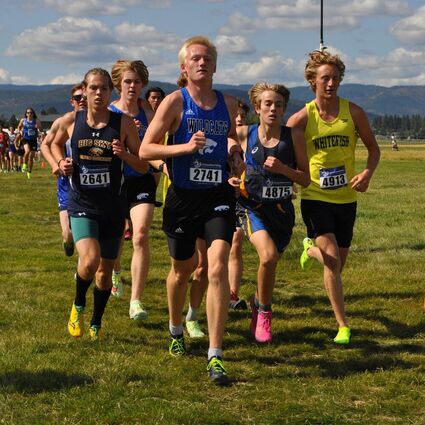 Junior Cael Thilmony (second from right) pushes through the competition at Rebecca Farm.

The junior high harriers also competed at Rebecca Farm, with Aubrey Baxter (10:27), Audrey Fairbank (10:41) and Lexi Franck (11:17) finishing in the top 20 in the 1.5-mile race. "Our girls team took fifth overall and this really goes to show how hard they have been working in pratice," said junior high coach Holly Franck. "THey are a determined, competitive bunch. I am really impressed with their times, and cannot wait to see where they are by the end of the season." Other competitors included Kylee Huff (13:15), Addie Traver (14:46), brooke Flemmer (15:17), Nevaeh Clawson (16:14), Weston Block (10:37), Wyatt Franklin (10:44), Nathan Baxter (11:35), Noah Hill (11:44), Evan Lofthus (12:01) and Remi Ryan (12:33). Coach Franck noted that Traver improved her time by three minutes from the previous race in Eureka, and Flemmer by four minutes. "Kylee also bettered her time, and Nevaeh did very well for her first race," Franck said. She added that the junior boys are showing up as intense competitors as well, placing eighth overall.

"With this being my first year as coach, these athletes have already surpassed my expectations," Coach Frank stated. "I am looking forward to their growth the rest of the season."

This week will be full of competition for the Blue Hawk team. They were scheduled to run in Mission on Tuesday, but smoky conditions forced that race to be cancelled. The Hawks will run at the Mountain West meet on Saturday before hosting their home race on September 20.