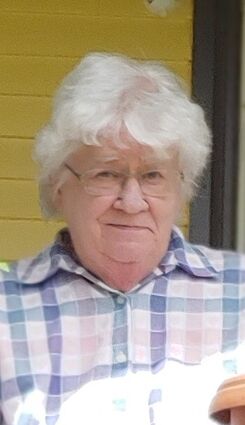 Graveside services will be held Saturday, October 1, at 11 a.m. at the Whitepine Cemetery for Thompson Falls resident Marilyn Jordan. Marilyn passed away at 84 in the Clark Fork Valley Hospital at the end of September of chemotherapy complications following breast cancer surgery.

Marilyn's parents were Walter and Florence Johnson. Walt and Florence met in San Francisco in the roaring 20s when Florence worked as a registered nurse and Walt attended UC Berkeley studying aeronautical engineering. When Walt's mother died they moved back to Montana so Walt could pursue his dream of farming. Marilyn was born in a tar-paper shack in eastern Montana near the end of the Great Depression, joining her older sister Kerin. When the project was finished, the Johnson family moved back to Trout Creek. Walt's family had come to western Montana with the railroad in the 1880s, and the family moved back to the house Walt was born in. A few years later Marilyn's little sister Katy joined the family. During WWII they went to live with Florence's family who immigrated in the 1890s from Stockholm, Sweden to Kingsburg, California. The heat was too much for Walt, and the family moved back to Trout Creek after the war ended.

Marilyn and her sisters grew up on the farm and were active in the Trout Creek/Whitepine community, attending the one-room school house in Whitepine until 8th grade, then graduating from Thompson Falls High School. As a girl Marilyn was active in the Whitepine 4-H club, and learned to brew dandelion wine and beer for the men who helped put up the hay from Florence. Marilyn loved music, and in high school she would travel to then far away Polson to see live music and jitterbug. In the summer of her junior year she worked in Colorado Springs as a valet parking attendant, parking cars for the rich and famous of the day. Following her high school graduation from Thompson Falls, she attended Kinman Business University for a semester, and returned home to marry Martin Pyatt. Marilyn and Martin lived up Swamp Creek while Marilyn worked for MK Engineers during construction of the Noxon Rapids Dam in the late 1950s. After the dam was complete, Marilyn and Martin moved to Libby, but the marriage failed and Marilyn moved to Bozeman to live with her sister Kerin while she worked at the Montana School of Nursing. In the late 1960s Marilyn moved home to Thompson Falls when she got a job with the Montana Job Service. There she met and married the love of her life, Marion Jordan, in the late 1970s, blending their family of his five children and her two.

Marion and Marilyn bought the old Lux place shortly after, raising sheep, pigs, chickens, rabbits, and more to feed those seven kids and the numerous friends they brought home. They were avid gardeners, growing fruit trees and one year planting three acres of garden!

After Marion passed away in 2001 Marilyn stayed at the place, providing a anchor in Thompson Falls for her children, grandchildren, and great grandchildren. She used to say that all the kids would come home and sleep for the first day, coming home to mom to escape the stress of the urban areas where they made their living.