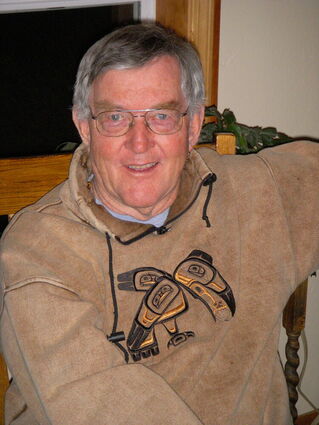 Robert Douglas Waters, "Bob," beloved husband, father, grandfather, great-grandfather and friend, passed away peacefully in his sleep on November 11, 2022. He was born on April 28, 1930, in Glendive, Montana, to Ruth (Squires) and Junius Waters. Descending from Montana homesteaders, he spent formative years on a small farm near Bloomfield, Montana, where from a young age, he learned practical skills and a strong work ethic. At age 9 and following the untimely death of his father, Bob moved to Glendive with his mother and sister, attended Dawson County High School and graduated in 1948.

Bob went on to attend Montana State University, majoring in Agricultural Engineering, graduating in 1952. He was a member of the Sigma Chi Fraternity and joined the Army National Guard as a tank commander. It was also during these years that he met his future wife, Carol Coughlan, who was attending University of Montana at the time. They married in 1955.

Bob worked eight years for Milne Implement in Glendive before becoming the local wholesale distributor for Chevron Oil Company. While in Glendive he served on the city council and the school board, eventually serving as chairman of the board. In 1968, he sold his Glendive business, purchased the Chevron distributorship in Plains, Montana, and developed this into a thriving regional distributorship for Western Montana.

In Plains, he served on the Plains School Board, was a trustee of the Plains United Methodist Church, coached the high school girl's tennis team and served as a President of the Corona Ski Club. Bob spent countless hours helping others in the community.

As a family man, Bob embraced many outdoor family activities, all new to him. In western Montana, he discovered bicycling, kayaking, canoeing, sailing, backpacking, skiing, and camping. Following his retirement, he and Carol incorporated these passions into travel adventures - bicycling, kayaking and hiking all over the world. Music was a special joy for Bob. He taught himself how to play classical guitar and practiced hours on his clarinet. He and Carol were dedicated members of the local church choir. Day to day, Bob was happiest when carving wood or working in his workshop making cabinets for friends, family, and church. He specialized in carving Christmas Santas and nativity sets, most of which he gave away.

Bob loved his family. He was a family man. He had many friends. He was kind and generous. He was a teacher and a consummate learner with a keen and curious mind. He had a great sense of humor - so many stories and poems. He was creative, tenacious and humble. He liked a good slice of pie.

Bob was preceded in death by his parents Junius and Ruth (Squires) Waters and his sister Marian (Waters) Challender. He is survived by his wife Carol and his children Shannon Nunlist (Mark) of Polson Montana, Michael Waters (Trina) of Lexington, Massachusetts, Kerry Hill (Edwin) of Spokane, Washington, and Mark Waters of Spokane, Washington. He is also survived by eight grandchildren and six great-grandchildren.

Services will be held in the chapel at Riverview Retirement Community in Spokane, Washington, on Saturday, November 19, at 2 p.m. Condolences may be addressed to Carol Waters at 1801 E. Upriver Dr., Spokane, WA 99207.