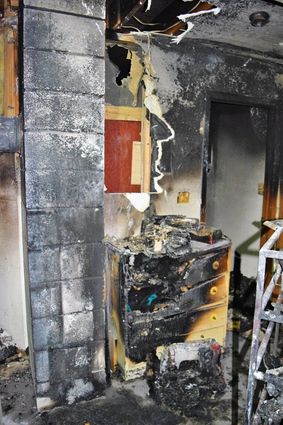 A CHIMNEY FIRE damaged the home of Doug and Lori Cooper in Trout Creek early last Thursday. The chimney clean-out had ignited and nearby materials caught fire.

Doug and Lori Cooper of Trout Creek were awoken to the sound of their smoke detector and the smell of smoke last Thursday morning when the clean-out from their wood burning stove caused nearby materials to catch fire. From there, the flames quickly spread.

According to the Coopers, they, along with their pets, survived the flames with no injuries. The lower level of the two-story home received extensive damage directly from the fire, while the upper level received damage from smoke and heat. Fortunately, there appears to be no structural damage to the house.

Lori stated that the heat was so intense that plastics on the upper level melted while smoke levels were down to about 5 feet from the floor. She managed to escape from her back door while Doug fought the flames in the basement. Serving as Trout Creek Fire Department Chief for many years gave Doug the experience and knowledge of how to handle house fires.

"Doug had it controlled until Trout Creek Fire arrived," Lori said of her husband, who used three fire extinguishers and the garden hose to knock down the flames before being forced out by the intense heat and smoke exposure. Within five minutes of having to evacuate, help from Noxon Ambulance and Trout Creek Fire Department arrived.

"Thanks to all the responders, fire and ambulance, friends, family and people that don't even know us," Doug said with extensive gratitude. "You never really knew all the friends you have until something like this happens," Lori shared.

In addition to expressing how thankful they are for everyone who has come forth to help them, the Coopers also ask that everyone take a moment and "make sure their smoke detectors are functional." Without their detectors operating properly, the outcome most likely would have been much worse.

Lori recalls moving into the house on Christmas Eve in 1983. Doug built the house with help from both Lori's and Doug's fathers. Lori said with teary eyes and a hopeful smile, "Maybe it will be Christmas Eve 2019 when I get to move back in again."