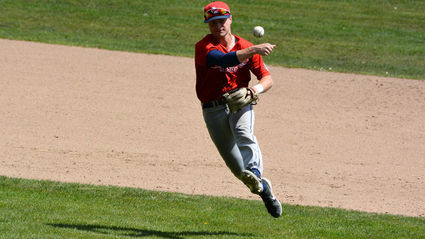 MAKING THE PLAY from his shortstop position, Trevor Paro, a former multi-sports standout at Hot Springs, recently completed his junior college career, helping lead the Lower Columbia College Red Devils to the Northwest Athletic Conference tournament championship in Longview late last month. Paro will play in a summer league with the Victoria HarbourCats in Canada the next few months, before deciding where to attend college and play baseball next school year.

Wherever Trevor Paro goes, and whatever sports he competes in, you can count on the championships following, be it in Hot Springs, Montana or Longview, Washington.

Since graduating from Hot Springs with significant athletic honors from multiple sports accomplishments in 2017, two more championships and more honors have followed Paro during his time at Lower Columbia College in Longview, where he helped lead the Red Devils to the last two Northwest Athletic Conference (NWAC) baseball championships.

Batting leadoff and playing shortstop this season, Paro's play was a key part of Lower Columbia's success in the NWAC tourney late last month, as the Red Devils overcame a second-round loss to top-seeded Everett and eventually defeated Everett twice on the final day of the tourney, 10-2 in the first game and 2-0 in the second, to win the '19 title.

"My job was to get on base and set things up for our other guys," Paro said. "Steal a base, move the runners over, whatever we needed to put more pressure on the other team's defense and pitcher."

In that role, Paro led the conference with 34 runs scored and was third in stolen bases with 19. Paro posted a batting average of .292 and an on-base percentage of .443 this spring.

Proving he also had a little power, Paro hit a walk-off home run, his only one of 2019, in a win over Yakima earlier this season.

Paro was at his best in the conference tournament at Story Field in Longview last month. Not surprisingly, he was named to the NWAC All-Tournament team after the Red Devils won that most recent conference title. To top off his mighty fine stay at Lower Columbia, Paro has been named second team All-Conference and been awarded league Gold Glove honors for his outstanding play this past season.

A junior-to-be next school year, Paro is now weighing his options to continue playing college baseball after graduating from Lower Columbia's junior college program. He said he would prefer to stay out west but has been getting some interest from schools like Tennessee and Marshall as well.

As for the upcoming summer, Trevor has signed on to play with the Victoria HarbourCats in southern Canada. The HarbourCats play in a summer league featuring off-season college players who are trying to keep their games sharp between seasons.

That Paro has enjoyed such immense success in baseball, after coming from a state that doesn't even have the sport in high school, is a tribute to his dedication and willingness to work hard at the sport he loves above all others.

If you live around here and follow sports at all you probably know about Paro's astounding athletic accomplishments in high school football, basketball and track and field, but also probably don't realize that none of those were his favorite sport. Trevor's favorite game to play, baseball is not a sanctioned high school sport in Montana, so he went to Missoula and Spokane during his high school days to play with traveling teams whenever he could.

Folks in Sanders County learned all about Paro's athletic prowess when he attended Hot Springs High School from 2013 to 2017. During his record-breaking senior year of football, Paro scored an amazing Montana record of 56 touchdowns, and completed his prep grid career with a staggering total of 135 touchdowns (another Montana high school record), leading the Savage Heat to the school's second State C 6-Man title in 2016.

Later on in each school year while in Hot Springs, Paro would trade his football cleats for basketball shoes and went on to star for the Savage Heat hoop team, setting a new Hot Springs High School career scoring record along the way and being named to the All-State C team three times, in his sophomore through senior seasons.

When track and field season rolled around in the late winter and spring, Paro was there representing Hot Springs in that sport, too, when he wasn't off playing baseball somewhere that is. Paro ended up winning medals in the State C track meets as well, specializing in the sprints and jumping events.

When he enrolled at Lower Columbia to play baseball, Paro found himself going up against players who had been playing organized baseball their entire lives.

"It was kind of tough coming from Montana compared to the other kids who played on high school teams," he admitted. "I never had a consistent practice schedule or was part of a program like the others.

"And they would talk about graduating with hundreds in their senior class," he added, "and joke about how there were only 21 in my class at Hot Springs. I did feel like I kind of stuck out in that respect, but I was able to gain their acceptance eventually."

Being a clutch performer for the team, like Paro always has been regardless of the sport he is playing at any given time, tends to endear one to his teammates.

Although now committed to baseball, Trevor sometimes wonders about what it would be like to get back into the game of football, where he enjoyed the most success in high school. In addition to leading the Savage Heat to the State C 6-Man title in 2016, Paro also starred for Hot Springs teams that advanced deep into the playoffs in his sophomore and junior seasons as well. 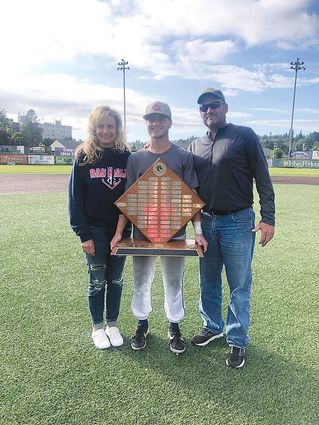 PROUD PARENTS - Kris and Bob Paro join their son Trevor for a picture with the NWAC championship trophy in Longview, Washington May 27. Kris and Bob made many trips to the Evergreen State over the past two years following Trevor in college.

Chances are, he could still break tackles and out-run defensive players if he were out there on the gridiron again. "That success in football is always in the back of your head and makes you wonder if you could still do it," Paro said. "But there can always be a 'what if?' I am glad I chose baseball and will keep pursuing it."

Outside of the teams he has played for, his home team of parents Bob and Kris Paro of Hot Springs, have always been there for Trevor, win or lose.

"I can't say enough about how my parents have supported me, I don't know how many times they made the nine-hour drive from Montana to watch me play these past few years," Trevor said. "Beyond that, I really have to credit dad for a lot of my success, he made a lot of sacrifices to make sure I had the opportunity to play when I was in Hot Springs, too."

Trevor said Bob had also become popular with his four baseball-playing roommates in Longview, in part because of his cooking ability but also for his knack of communicating. "He is good at building relationships," Trevor offered. "He would show up and cook us all a nice meal and hang out with us. The other guys ended up getting to know him pretty well."