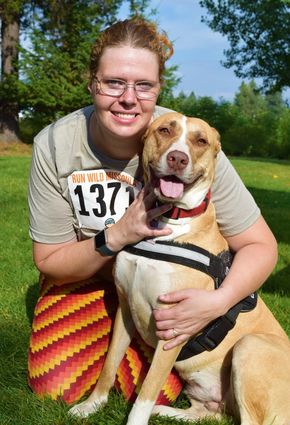 WINNERS ABOVE ALL OTHERS– Amber Riel and her service dog Charlie Anne have proven what true winners are by participating in the Huckleberry Festival Fun Run Saturday morning. Overcoming life's obstacles of Parkinson's Disease and suffering from a traumatic brain injury, Riel competes in races just to prove her doctors wrong in that she'd never be able to run again.

Sometimes it is hard to remember the things that matter in life. Sometimes we get caught up in who did the best at something, or who came out on top. When running a race, it is easy to base success on placement or time. This year's Huckleberry Festival Fun Run had a participant who is clearly a hero above all others.

Amber Riel of Florence, Montana, did not finish first. She did not finish second, third, fourth or fifth. But she did indeed finish. And considering her circumstances, finishing a 5K race is more than she could have ever imagined.

Riel, who is now 35 years old, suffers from Parkinson's Disease, a condition that effects the brain causing stiffness, shaking and difficulties walking, balancing and overall coordination. In addition, she was in a severe auto accident in October 2017, leaving her with a traumatic brain injury.

After recovering from her accident, doctors told Riel she would never be able to function the same physically, never mind running races again.

"The answer is simple, I've been told I cannot do this, that's why I keep doing these runs," Riel expressed with the utmost determination when asked why she participates in running races. "I will prove them wrong."

Just like Riel, Charlie Anne (Riel's Boxer and American Great Dane mixed service dog) had higher standards for herself. Being a rescue dog not only once, but twice, it wasn't very promising that she would find a forever home. Come to find out, Charlie Anne was just waiting for her moment to shine.

"Within five minutes of us meeting each other, she was in my lap and we just knew it," Riel recapped what happened when she visited the shelter and connected with Charlie Anne. "They told me she would not make it as a service dog," but Riel knew better, and the shelter did not know Riel, the woman who does not listen to no, never, or won't happen.

Charlie went home with Riel at the age of nine months. Now, just over two years later, they are training to work at nursing homes. Together, the two are ready to make the world a better place.

Both Riel and Charlie Anne have participated in the 5K "Run Like a Mother" Mother's Day Race and the "Lard Butt" 1K races in Missoula. "I even won the election and was named 'Fat Sasquatch,'" Riel chortled, referencing her sasquatch costume and how much fun she had at the Lard Butt. She commented that the best part was that doughnuts were served after the run.

"I've been getting back into it," Riel said about racing and getting back in to running. So far, since her accident, she has three races under her belt. Something says that these three are going to multiply into many, many more...proving she is the real hero in the sports of running, and life.