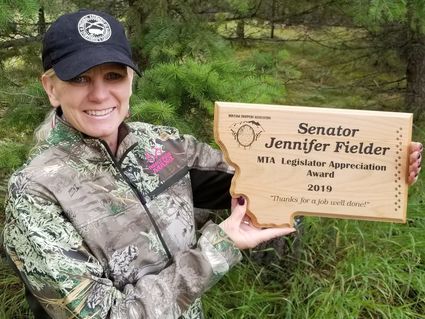 Sen. Jennifer Fielder and Rep. Bob Brown, both of Thompson Falls, have received the 2019 Legislative Appreciation Awards from the Montana Trappers Association (MTA). The awards were presented at the MTA's annual rendezvous in Lewistown, Montana, earlier this month.

MTA Vice President Matt Lumly said both have been instrumental in protecting hunting, fishing and trapping in Montana. "It has been a great privilege to work with them the past few years," Lumly said. "They have done a heck of a lot for sportsmen in our state."

Lumly, of Emigrant, Montana, is a ranch manager as well as a hunter and trapper. "Defending our right to hunt, fish and trap is an ongoing battle," Lumly remarked. "Fielder is an absolute bulldog and really held the line against the animal rights extremists who want to end hunting and trapping in our country. And Rep. Brown worked hard on important legislation to help get the wolf population under control."

Fielder has served on the Senate Fish and Game Committee since her freshman term in 2013 and has chaired the committee since 2017. Similarly, Brown has been a member of the House Fish, Wildlife and Parks Committee since coming to the legislature in 2015 and was appointed to chair it this year.

Both legislators are active hunters and anglers, but neither one traps. "Even though I am not a trapper," Fielder said, "I do understand how vital trapping is as a wildlife management tool to keep predator populations manageable and remove nuisance animals that are harming people or property."

Brown echoed those sentiments. "Wolves have been wreaking havoc on livestock and big game in this state, and legal trapping is usually the most effective way to control them," he said. "We are trying to provide sportsmen more flexibility in their harvest means and methods and reduce the cost of wolf hunting licenses so taxpayers don't have to pay government workers to go out and do the predator control for us."

Fielder said getting the award from MTA meant a lot to her.