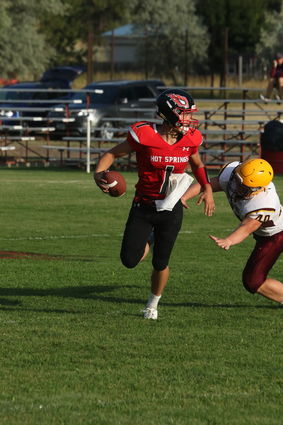 A HARD MAN TO HOLD ON TO - Pictured in an early-season game with Harlowtown-Ryegate, Hot Springs' Brandon Knudsen scored four touchdowns rushing and pitched four touchdown passes in Friday's win over Noxon.

If there were any doubts before, there aren't anymore – the Hot Springs Savage Heat are a powerhouse team – a for-real deal in the world of Montana 6-Man football.

Coach Jim Lawson and his No. 3 ranked Savage Heat were at their 6-Man best Friday night in Hot Springs, turning a highly-anticipated showdown with fellow contender Noxon into a runaway and moving to the 67-28 Western conference win.

"We have been waiting for a game like this," Lawson said. "A game against a quality opponent with something riding on it, and we performed well. It was a great effort by all the kids."

The Heat improved to 2-0 in league action and 6-0 overall with the win.

"We had some early hiccups but were able to get things worked out," he said. "We came into this game with a lot of respect for Noxon and leave it the same way. They are a good-looking team with some fine athletes that are going to pose problems for someone down the road."

Brandon Knudsen enjoyed a phenomenal game in leading the Heat to the big win, both on offense and on defense. From his quarterback position, he ran the ball 12 times for 216 yards and four touchdowns, besides completing six passes for another 127 yards and four more touchdowns.

Defensively, Knudsen pulled down 11 tackles, including a quarterback sack, and an interception.

Based on his amazing efforts in this game, Knudsen was nominated for Western Montana Player of the Week honors earlier this week.

Coach Lawson's son Kyle was on the receiving end of all four of Knudsen's touchdown strikes, covering 47, 26, 10 and 20 yards, and also had seven tackles on defense. The first three of Lawson's touchdowns came in the first quarter when the Heat managed to take control of the game with their evolving offensive schemes.

"Our offense has morphed quite a bit from what it was earlier this season," coach Lawson said. "We figured out better what our strengths and weaknesses are and have kind of rebuilt our attack."

Super sophomore Jack McAllister, who just had the cast removed from his broken right thumb last week, registered a team-high 14 tackles, including a strip-and-score 14 yard fumble return for a touchdown. He also booted three two-point conversion kicks and threw a pass for a one-point conversion to Knudsen.

Luke Waterbury had seven tackles and an interception on defense, and scored on a four-yard run and caught a pass for another nine yards on offense.

The Savage Heat hit the road for a day game at Sheridan this Saturday. The Panthers are 0-2 in league play and 3-2 overall after losing 65-12 to White Sulphur Springs last week. Now 2-0 and 4-2, White Sulphur is set to visit Hot Springs for a key conference game Oct. 18.

"That score is a little misleading, they were actually in that game with White Sulphur up into the fourth quarter," Lawson said. "Sheridan is an up-and-coming team that we cannot afford to overlook, especially since we are playing at their place."