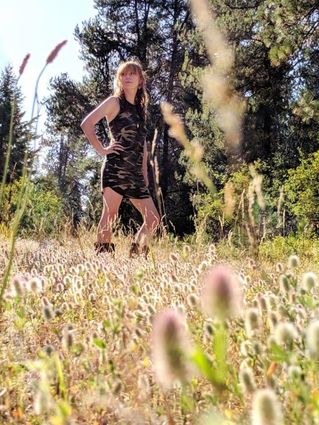 In addition to announcing scholarship recipients at graduation ceremonies, Thompson Falls graduate Lacy Pardini received a surprise that she was selected as the winner for the InvestWrite national writing competition.

In one of Pardini's high school classes, 21st Century Skills, she participated in the Security Industry and Financial Market Association (SIFMA) Foundation's "The Stock Market Game." Pardini's teacher, Penny Beckman, submitted Pardini's "pitch" to InvestWrite because she believed in what Pardini had submitted.

"InvestWrite, an innovative national writing competition, produced by The Stock Market Game program, adds a critical thinking component to help reinforce concepts leaned in the classroom," states InvestWrite's website. In the classroom, Pardini received instruction on business and finance, and how investments now can turn into large, or little returns later.

Upon completing the classroom curriculum, Pardini entered the written portion of the game. In more than 500 but less than 1,000 words, she had to express what her dream in life was and show how she could obtain that goal utilizing The Stock Market Game's concepts and how they behave through the financial industry. Pardini's writing made the first cut when Beckman submitted it to InvestWrite, however, her writing had to go through three more rounds of judging by financial services industry volunteers. Her submission was judged on rational, understating of the subject matter and writing style.

"I would like to start a homeless shelter in Northwestern Montana," began Pardini's pitch, continuing to state that even if a homeless person does make it to a shelter in Missoula or Kalispell, they are often turned away because the shelters are "full or over capacity."

Financial options were outlined by Pardini, who was ultimately asking for InvestWrite and the SIMFA Foundation to finance her idea. "With your help we could feed, shelter and provide resources to help many homeless people in need." She continued with a financial breakdown of expenses and concluded that she would need $63,250 to start her homeless shelter.

"If you would like to help beyond the seed money," Pardini then explained utilizing knowledge gained in the classroom, "you can opt for a charitable lead grantor trust, which would be a 10-year contract with the minimum buy-in of $15,000, but it comes with a 5% payout rate and 6% investment rate." She did not stop there. She also explained another option; a charitable gift annuity, which she stated is a 20-year contract with a minimum $5,000 to $10,000 buy-in, but one must be 45 years in age to receive payments.

InvestWrite bit. They liked what Pardini was showing them. Not only was her idea a great one that would help people get "back on their feet," but it was clear that Pardini was competent with the material learned through The Stock Market Game.

Unfortunately, with the current effects the pandemic has had on the market, SIFMA has had budget cuts and was unable to award funding for InvestWrite winners this year. According to Beckman, other avenues are being investigated to see if financial help is available to help Pardini pursue a college degree.

"From the time I was around 13-15 my family was going through hard times and we ended up without a house," Pardini shared in her writing. "We lived in a beat down 19 ft. trailer for awhile without power, running water or plumbing. We had to boil pots of water to wash our hair or ourselves."

"We moved around in that for a while and ended up in a very beat down little shack with no furniture, sleeping on cushions. A couple months later and we had to get out of that, and we didn't even have the trailer anymore, so we were living out of a truck in late fall in Northwest Montana." Pardini added, "It gets very cold, and it's very hard to stay warm. And during the fall or winter in Montana that can be deadly with low temperatures, and storms, and no shelter."

Pardini's pitch reflects her knowledge of The Stock Market Game and how the financial industry works. Yet, her story shows first-hand understanding of homelessness and her passion for wanting to help others in need.