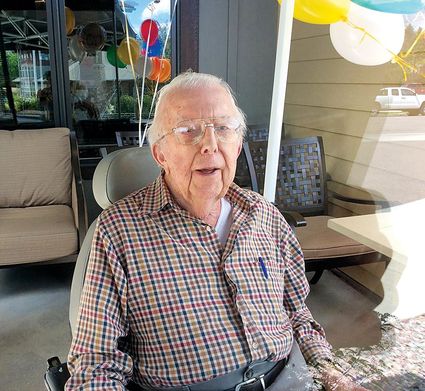 Millar Bryce, a longtime resident of Plains, celebrated his 100th birthday on July 24 with a few close friends and relatives at Buffalo Hills Retirement Home in Kalispell. Bryce spent most of his working years with the Flodin Lumber Company, of which he was a partner. Bryce might be remembered as a light plane pilot who enjoyed flying over the Clark Fork River.

Bryce was born in Saskatoon, Saskatchewan, Canada. When he was a young boy his family moved to Austin, Texas, where he grew up and finished his education. When he was 15, he started a summer job in Washington where his brother, Eric, was working for their uncles, Swan and Walter Flodin, at a small sawmill near Granite Falls. He was to return to that summer job every year until World War II broke out and Millar immediately volunteered for the Royal Canadian Air Force, and was accepted. He was trained as a navigator and stationed in England for three years, from which he made bombing. runs over Norway.

After the war, Bryce returned to Plains and resumed working for Flodin Lumber Company, where he later became a partner. In 1958, he married Gertie Smith and inherited two sons, Pat and Mike Smith. Bryce was a true community leader for many decades, serving on many boards and was instrumental in building Clark Fork Valley Hospital in Plains.

After the mill was sold to Thompson River Lumber in 1986, Bryce worked briefly for another sawmill in Polson before retiring. Bryce then lived in Missoula and New Mexico briefly before returning to Plains. He moved to Kalispell in 2018.

At 100, Bryce enjoyed visiting with the folks who gathered to wish him well, even though he remains in lockdown because of the COVID-19 pandemic.