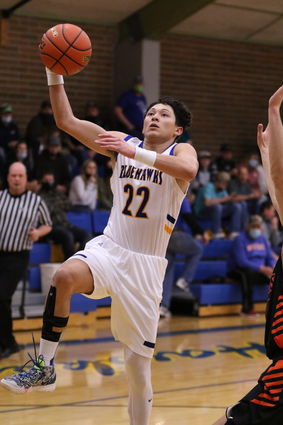 Maybe the Bigfork mystique isn't what it used to be. Or maybe the Hawks are just really good.

Facing one of the most dominant Class B programs in Montana over the last decade on their home floor, the Thompson Falls Blue Hawks took the Bigfork Vikings to task last Tuesday (January 12), dumping the Vikings 81-75 to register an important early season road win in District 7B conference play.

After years of being subservient to the usually-powerful Vikings, the worm has turned somewhat on Bigfork the past few years as the rest of 7B now seems to have caught up. Coach Jake Mickelson and his Hawks in fact split four games with the previously untouchable Vikings last year, including a loser-out win in the Western B tournament, where the Hawks finished fourth.

But this latest victory is still a very sweet one for 4-0 Thompson Falls, and led to the Hawks earning the No. 10 spot in the latest Class B power poll.

Originally set to play Deer Lodge in Thompson Falls Saturday, the Hawks did not play that game which was cancelled early last week. Mickelson had worked hard to line up Florence to replace Deer Lodge, but Florence scratched out of that game late Friday night.

Florence would have been a great game to get as the 4-1 Falcons were ranked No. 9, one place ahead of the Hawks in the power poll. But you take what you get when you are playing during a pandemic.

"The boys were pretty bummed when they heard Florence wasn't going to play us," Mickelson said. "That would have been an awesome matchup, a great game to have here, and I think the fans would have liked it too."

The Hawks likely would have defeated Florence if they had played like they did in Bigfork last week.

Playing great basketball from the opening tip, the Hawks led the whole way, shooting an amazing 59.6% from the field, including making 7 of 15 3-pointers.

Dante Micheli and Kade Pardee did the most scoring damage for the Hawks with 20 and 19 points each, respectively. Pardee was also a monster on the boards, pulling down a team-high 13 rebounds, besides dishing off four assists and blocking two Bigfork shot attempts. Micheli also passed out four assists.

The Hawks were set to play Stillwater Christian in Kalispell Tuesday but results of the game were not available at press time.