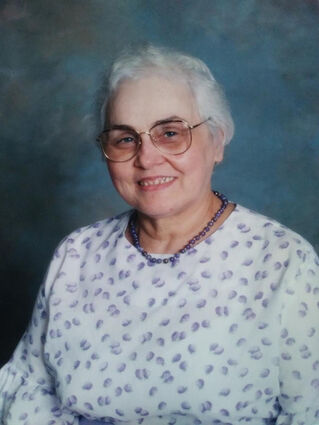 Mabel (Mae) Fried, loving and faithful mother, sister, friend and daughter, is now at rest from the pains of this world. She passed away October 4, 2021, peacefully in her sleep.

Mae was born October 19, 1936, in Upham, North Dakota, to Robert and Adeline Gomke and was one of seven siblings. Raised on a farm, many were the stories she could tell of hauling water from the outdoor pump to the house, herding the cows to the barn to milk, yodeling with her sister Florence until they were chased by the angry bull, and walking through cold winter blizzards three miles each way to school. But she maintained her indomitable spirit by singing as Florence played guitar. They regaled their family and neighbors with their little band. Her love of music often inspired her to waltz about the house until her heart would palpitate wildly, forcing her to discontinue the outburst of joy that music evoked. She was particularly fond of the songbirds that frequented her fruit trees. Flowers always brought a smile to her face and were often displayed in her home. Gardening gave her great pleasure when the sunshine was her friend. And at harvest time she delightfully gazed upon the canned goods she preserved to feed her family wholesome food. Throughout her life she worked hard and lent a helping hand whenever she could. With a generous heart she found ways to show deep concern for the needs of others. Anyone arriving at mealtime was offered a plate at the family table.

She was married for 36 years to Clarence Fried and moved to Plains, Montana, in 1960, where she lived until she relocated to the Hot Springs Rehabilitation Center.

Mae's love for the Bible made her a woman of strong faith. She became one of Jehovah's Witnesses in 1963 and was baptized in a livestock tank filled with cold water from the well in her basement. She lived by her strong convictions and shared encouragement with others from the Bible whenever possible.

Her sweet smile, strong, giving hands and loving heart will be missed until we are reunited in a world without death, pain, mourning nor outcry.