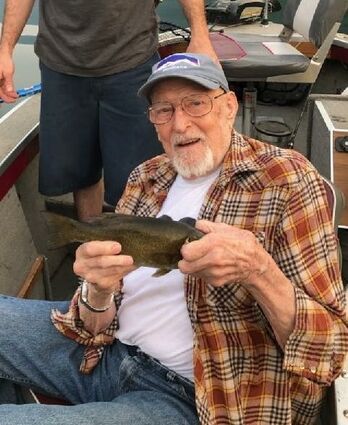 Thomas Leon Johnsen, Tom to all who knew him, went to be with his Lord and Savior, Jesus Christ, on October 3, 2021, after a brief illness. Tom had just turned 88. He loved living in Thompson Falls and would tell you God brought him here. He was born a stubborn, hardheaded Norwegian. His grandfather came to America from Norway.

Tom was born on September 20, 1933, in Los Angeles to Everett and Olive Johnsen. He had two older brothers, Joe and Martin, who were 15 and 13 years older than him. He was actually born on Joe's birthday. Tom was a youngster during WWII and was the youngest member of the U.S. Army Cavalry. He performed every Sunday and other times as needed in Arabian horse shows, at the U.S. Cavalry Post, formerly Kellogg Horse Ranch, and now Cal-Poly Pomona. Tom loved animals, farm animals in particular, and always had at least two dogs by his side. As a boy Tom liked to experiment with chemicals of all sorts, which were readily available by mail in his time. He had explosives, caustics and more. His dad even built him a little "laboratory" in the backyard. One day a man knocked on the door and asked Tom's mom where he might find "Johnsen's Laboratories." She pointed him to the backyard. He had a fun childhood, even though it was during WWII. He recalled to his children about grease drives (spent cooking grease), rubber drives (tires), ration stamp books, the dirigibles that patrolled the west coast for enemy ships, blackouts and more.

Tom attended El Monte Union High School and graduated in 1951. He didn't enjoy the academics of education, but his mom was once told it was because he was too smart for what was offered to him. He taught college courses in diesel technology in the 1980's, but never attended college.

In 1950 he met his love, Patricia Shelton, while both attended church at the Christian Missionary Alliance Church in El Monte. They were married on January 31, 1954, and settled in El Monte, where they lived for the next 22 years.

Tom was an independent man when it came to work. When he and Pat were first married, he drove trucks from LA to Canada until their first child, daughter RuthAnn, was born in 1955. Tom decided that being on the road was over. Tom then took to turning wrenches as a diesel mechanic. He became one of the most well-known diesel mechanics in southern California and got calls from drivers on the road from as far away as the east coast. He even acted as technical advisor for a 1970's television program for a couple of episodes, until they asked him how to hotwire a truck. He was an honest man. In the meantime, Tom and Pat had two more children, sons Bruce and James.  By the 60's he was tired of "knuckle bustin" and went into heavy construction. Tom developed a great passion for operating heavy equipment. He worked on many of the freeways in southern California at one time or another over a 15-year span. He went back to diesel in the late 1970's, running his own shop for several years. In 1986 he and Pat moved north to Orland, California where Tom was finally able to follow his life's dream to farm. He acquired 80 acres of almond orchard and farmed until 2009 when Pat's health declined seriously, and they sold the farm. Pat passed away in Dec 2011. She often said of Tom that she had four children. But he was always a wonderful, Godly husband and daddy. Tom stayed in Orland near his daughter and son-in-law, Larry, until they all moved to Libby, Montana in January 2019. In June 2019 they moved to Thompson Falls. Tom had dreamed of living in Montana for some time. He was a member of Open Door Baptist Church, where he loved the fellowship and teaching from God's word, the Bible.

Tom worked hard all his life, but he always played hard with his children and grandchildren too. He led family hiking trips up Mount Whitney more than once, camped in Death Valley, and went on weekend day packing trips with his daughter and her children. Tom had many hobbies, including gunsmithing and building radio-controlled airplanes. He also owned and flew two military aircraft, a T-6 and a T-28. He was a self-taught pilot and could land a three point with ease. He enjoyed woodworking in his later years. It's because of these many wonderful things that Tom, Dad, Granddad, Uncle Tom will be remembered and missed by us all.

Tom was preceded in death by his wife, Pat, of 58 years. He is survived by his daughter, RuthAnn Mandella (Larry); sons Bruce Johnsen of Elk Grove, California, and James Johnsen (Vonnie) of Tucson, Arizona; eight grandchildren, 13 great-grandchildren and numerous nieces and nephews.