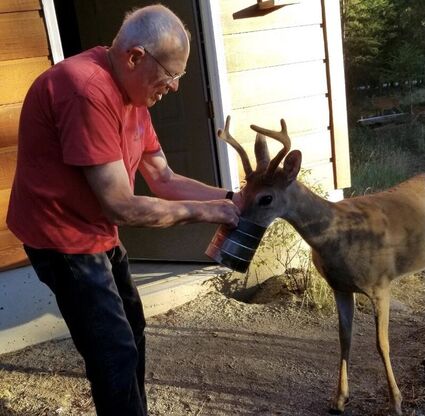 On November 21, 2021, my dad, James I. Mershon, took the final few steps needed to enter heaven. He did so knowing that his three children, Barbara, Karen, and Mike and their spouses Greg, Jim and Rebecca will circle Jan, his wife of nearly 62 years, with love and whatever comfort and support she needs.

He was also fully aware that behind that first layer of support is another with nine grandchildren and nine great-grandchildren ready to step in when necessary, as is his sister-in-law and her children.

While Jim's family isn't great in numbers, it is great in love, strength, and support due to the example and expectations learned from loving him through the years.

Jim, as he was known to friends and family, was born in Helena, Montana, to Gerald "Ted" and Charlotte Mershon on September 2, 1940. He was raised in Helena and met Jan in high school when both were playing in the Helena High Band. They married in 1960 while Jim was still attending forestry school in Missoula at Montana State University-now proudly known as the University of Montana. Go, Griz! Jim worked summers for the U.S. Forest Service beginning in 1959, and, after graduating in 1962, began working for them full time, building a successful career until his retirement in 1999 as District Ranger in Trout Creek.

Although moving every three to five years was the norm during his career in the Forest Service, Jim was a firm believer in community involvement. He was always active in church and was committed to working with the Boy Scouts in Idaho and Montana for 50 years. He was also very involved with Rifle and Bow Hunters Education in both Montana and Arizona for 43 years. In addition, Jim was a member of the Sanders County Chapter of the Rocky Mountain Elks Foundation for nearly 20 years and was also involved in Lions, Kiwanis, and Rotary Clubs in the various communities he and his family lived throughout his career.

Following his retirement in 1999, Jim and his wife Jan were able to enjoy two big items on their bucket list: a month-long trip to Alaska with a two week sight-seeing tour in Canada, and then a month's vacation in Australia with a two week adventure in New Zealand. Jim was also able to participate in three U.S. Navy Tiger Cruises-two with son Mike on the USS California and the USS Milius, both guided missile destroyers, and one with son-in-law Jim on the USS Nimitz, an aircraft carrier.

Of all the adventures Jim experienced in his lifetime, however, the one he enjoyed and valued the most was his family. As grandchildren and great-grandchildren started to arrive, his grin stretched wide from ear-to-ear. Summer visits from his kids were always greatly anticipated and meant trips on the boat, shooting at the Noxon Gun Club, feeding his "Bambis," and sitting on the deck with a cold beer, telling tales while watching night fall.

Jim lived a life full of ups and downs but knew how to find the humor in most situations, and it showed when he reminisced about his life stories. He passed that on to his family, and we can't wait to share these memories with all the great-grandkids as they get older and are able to appreciate them. We're going to miss Jim-known to us as husband, Dad, and Papa, but we know he's in a good place. That in itself is reason enough to celebrate his new adventure in Heaven even through our tears now and next summer when family and friends gather in his beloved Trout Creek for a celebration of his life.