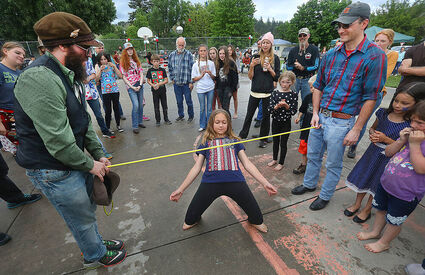 SHORTNESS HELPS – Eleven-year-old Ziah Hensrude of Hot Springs makes it beneath the limbo rod to tie with Jubal Ryan. Holding the rod is Newman Ryan (left) and Ivan Nethercott while the crowd gathers to see a new champ.

The reigning adult limbo champion had to share his crown and prize booty with a kid this year.

With Newman Ryan of Plains and Ivan Nethercott of Bozeman manning the limbo stick for the taller class of competitors, the entire line made it through the first run. A few were bumped at their second time around, but by the fifth most were gone from the lineup. It eventually came down to Jubal Ryan, 23, and 11-year-old Ziah Hensrude of Hot Springs, who twice successfully made it under the bar at 30.5 inches high, along with Ryan. Ryan had experience on his side, but Hensrude was 10 inches shorter than the 5-foot, 8-inch tall Jubal, who had to split the $100 prize with his Hot Springs opponent. In the children's shorter class, which had only 19 kids, Plains resident Braedan Allen, 8, was the champion, winning a gift basket of goodies. In second place was Madison Sturdivant, 8 of Plains.

The Ryans have hosted the end-of-the-day Plains Day event for several years, although it was not officially a part of the annual festival when the family began putting on the community dance. "We just wanted everyone to have a good time and to know life is worth living," said Newman Ryan, the main coordinator. "Due to some fantastic weather, there were moments of euphoria with dancing and singing in the rain," he added, although the weather broke about 7 p.m. after a special opening ceremony. Some 200 people attended the event throughout the evening, including several from outside Sanders County. A brother and sister drove from Bozeman just for the dancing. The event included the limbo contest, a potluck dinner, dancing, and a drive-in movie of the classic "Anchors Aweigh."

"I think this is absolutely one of the highlights of the year," said Larry McDonald, a retired principal of Plains High School. "The years the Ryans didn't put it on, it was a dud," he continued. With the consistent rain and threatening clouds, Newman had a contingency plan to move the entire gala to the VFW and to show the movie in the school's auditorium, but around 9 p.m. he decided to keep it at the park. However, he appreciated that the school and veterans club were willing to "step up" and help.

The Ryans spent about $5,000 to put on the event, including hiring D.J. Connelly from Coeur d' Alene, Idaho, as the disc jockey for the evening. It was Connelly's first time to entertain at Plains Day, but he's been a professional DJ for 10 years. He played a variety of couples and group dance pieces - Big Band swing, pop, rock 'n' roll, Country, polkas, and waltzes, including a favorite of Dan and Roxsanna Ryan, Newman's parents, the "Virginia Reel," a popular barn dance that involved more than 30 people on the basketball court converted dance floor Saturday. The dance went on until about 10 p.m., followed by the movie on the grass. The festivities ended around midnight.

"It's a blessing for the community that they do this," said Chris Allen. "And every year, they put out the food, the dancing, bring in the DJ, and they do it all because they like to outreach to the community."