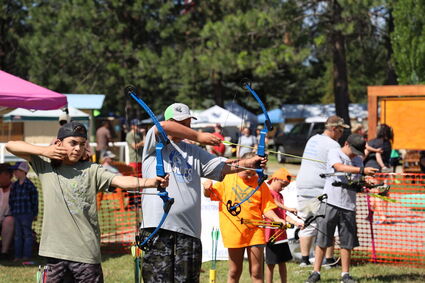 Members of the Trout Creek School community archery team demonstrated their skills at the festival Saturday.

Archery demonstrations put on by Trout Creek School community archery team were a new addition to this year's Huckleberry Festival. Jerry and Becky Doyle, who help coach the archery team, were at the festival to help over the weekend with the students' demonstrations. Lucas Summers, Riley Reum, ShayLyn Stein, Cameron Eaton and Eithan Chambers were some of the students at the festival putting on demonstrations as they shot at targets, balloons and plastic archery animals.

"We have 20-plus years of working with kids who want to learn about archery," Jerry said. "We help the kids who are struggling and who don't understand why their arrow isn't shooting straight. We like to volunteer our time to keep kids shooting and keep them outdoors."

Archery demonstrations were held both days of the festival and saw a steady stream of onlookers. Trout Creek School Superintendent Preston Wenz organized the demonstrations and said the weekend went well for the first year. "The kids had fun and we had people stop by and watch," he said. "We would do it again if it is in the plans but we would probably add some other challenges."