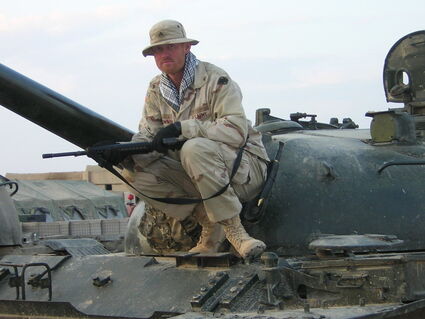 Doug Browning, age 50, from Plains, America, passed into the holy hunting grounds on September 5, 2022, from a sudden heart attack. Doug was born on September 22, 1971, to Mary Kay and Vernon Browning.

Doug lived his life doing everything honestly and with passion (not good for poker because when Doug bet, you knew he had a better hand than you). Doug graduated from Plains High School and continued to live in Plains, his one true home. He went on to play college basketball alongside many of his high school teammates and his brother. Doug’s passion for hunting, fishing and sports was only surpassed by his passion for his family and friends. Doug loved helping pack elk out for his friends just as much as packing his own elk out of the woods. He loved his country and served in the Montana National Guard as a scout and the U.S. Army Reserves as a plumber. Doug had multiple deployments with the 279th Engineer Detachment. Doug’s travels for his country took him to far off lands from Central America to Afghanistan and Uzbekistan. During his time in the military, he was looked up to as a mentor by all his peers. He also was able to help the community build the Trap Club while working weekends in the Army Reserves. He would later be a member of the VFW Trap Team. Doug retired from the Army and went on to help with the VFW 3596 in Plains and became Post Commander from 2007 to 2009. He also worked long, hard summers on the fire crew for the DNRC, eventually working his way up to Fire Management Officer of the Plains unit. His knowledge of the land and fire was vast, and many people sought his expertise in very difficult times.

Doug married the love of his life Tara on September 18, 2010. They both had dreams of starting a family and raising them on a piece of land in Plains. The twins Trace and Colt arrived in 2012. Their hands were definitely full, but not as full as their hearts. In 2017, they both welcomed their third and final child, a boy they named Jebediah. Doug’s commitment to being the most loving father was evident to his children and the entire world. His best role in life was being a father. When Doug wasn’t working, the family was operating as one unit accomplishing big goals they had always dreamed of on their little homestead. Doug has bottle fed calves, helped deliver piglets, and coached his children with their 4-H animals.

Doug is survived by his wife Tara; sons Trace, Colt and Jeb; his parents, Mary Kay and Vernon; brother Shane (Tina); and sister Shannon. He also left behind nieces, nephews, aunts, uncles, cousins, friends and soldiers. Many great memories of the type of gentle giant, class clown and the humble human Doug was will live in our hearts forever.

When you are feeling down, just wait for that updraft to help get you back on the proper path. With a strong arrow and three fletches, the calm wind will keep you on your path forever.

The family is asking that if you have any stories of your adventures with Doug to share written accounts with Doug’s boys, as their father was taken way too soon and it would mean so much to preserve those memories for years to come.

Funeral services will be held at 3 p.m. on Saturday, October 1, 2022, at Plains High School, followed by gravesite honors and a celebration of Doug’s life will be at the VFW. Please bring a side dish or dessert.