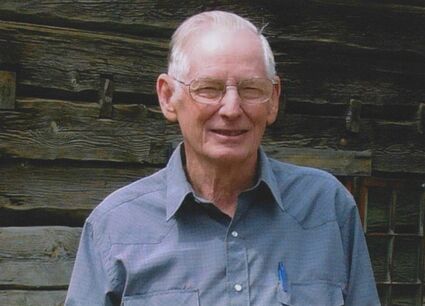 Alan John McCoy, age 95, passed away peacefully at the home of his daughter Laurel and son-in-law Scott on October 10, 2022.

He was the fourth child born to John Campbell & Ethel Pearl (Mountjoy) McCoy on October 2, 1927, in Camas Prairie, Montana. In 1929 when Alan was two the family moved to Alan's grandfather's (Oscar McCoy) homestead three miles northeast of Lonepine, which had been established in 1914. In 1940 they moved to where the family ranch is today.

He went through all twelve grades at the Lonepine School and graduated in 1946. After graduation he was inducted into the U.S. Army, receiving basic training at Fort Lewis, WA becoming a Sergeant. Following basic training, he was sent to Yokohama, Japan near the end of World War II where he was assigned to work in a heavy equipment repair company. He received his discharge papers in 1948 and earned both the Victory Medal and the Army of Occupation Medal Japan.

Following his time in the army, Alan worked road construction and performed mechanic work in 1948-1952, including working on the Alcan Highway in Alaska. Later, Alan worked the family ranch and developed a love of horses; during the summers, raising and training them throughout the 50's. He then raised registered Hereford's in the 60's.

In 1954 he began his college career at Central Washington University, Ellensburg, WA and then that fall transferred to the University of Montana in Missoula. He received his BS degree in Math and Science in 1956 and his Masters in 1957. For 3 years he taught science at Missoula County High School and then science and math for 6 years at Plains High School. He finally returned to Hot Springs where he was the principal and taught math and science for two years before becoming the Hot Springs Schools' Superintendent.

After he chose to leave the education field, Alan joined a partnership with his good friend, Bill Christensen and started Irrigation Equipment Sales, Inc. He retired from the business in 1997. Then raised commercial stock cattle the remainder of his life.

In 1952, Alan met the love of his life in Hot Springs, Montana, and became engaged to Sophie Victoria Simla, in the spring of 1953. They were married in Kelowna, BC, Canada on November 19, 1953, at St. Theresa's Catholic Church. Alan and Sophie began their 60 years of married life in Ellensberg, Washington, before moving to Missoula. They proceeded to move to Plains, MT for another six years before finally settling in Lonepine at the McCoy Ranch in 1966, where they raised their three children, Robert Campbell, Scot Alan, and Laurel Ann.

Alan will be fondly remembered for his devotion to family, his kindness, his service to others, and his strong work ethic. Alan was involved in the Western Montana Stockmen's Association, the Lion's Club and the local VFW as well as many local community events.

A Celebration of Life for Alan, will be Saturday, November 5, 2022, at 1 p.m. at the Lonepine Community Hall, Lonepine Montana. Graveside services and reception to follow.

In lieu of flowers, memorials may be made to the John C. McCoy Memorial Scholarship and/or the Lonepine Community Hall.

Arrangements are in the care of Dokken-Nelson Funeral Service. http://www.dokkennelson.com