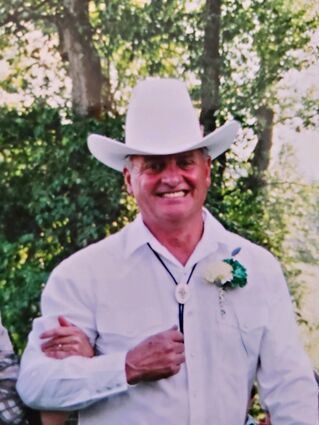 Michael "Mike" Dennis Priddy, 75, of Huson, passed away from natural causes on October 12th while enjoying his westerns.

Mike was born on July 4, 1947, to R.W. "Buster" Priddy and Mae Oleson Priddy. Mike grew up in Dixon and graduated from Dixon High School, where he was very active in sports. After high school, Mike served as an aircraft mechanic in the Navy on the USS Saratoga and worked on the Pack River Ranch. Mike also drove truck, sold heavy equipment and eventually retired from Pepsi.

In his early days, Mike loved being a cowboy, doing team roping and bull riding. Mike married Barb Enman and they were blessed with two daughters, Loretta "Lori" Lynne and Bonni "Bop" Jo. Mike and Barb divorced and Mike later married Ladean "Bunky" Lockridge-Eck in Missoula and gained a son, Robert "Bob" Eck. Mike and Bunky enjoyed watching the kids play sports, traveling and camping, and going to the cabin in the summer.

Mike spent much of his free time helping his family and neighbors, hunting (sometimes observing the deer off the porch while in his tighty whities), repeatedly watching westerns, and telling tales of his various adventures while being pestered with Bunky's frequent, "Why Mikey?". Mike enjoyed visits with his grandchildren, laughed at his great granddaughters' sass and was frequently seen driving up and down the lane on his four wheeler for a visit with the neighbors.

Mike was preceded in death by his parents, siblings Carrie, Buck, and Luella and grandson Alec Lennemann.

The funeral service will be held on Monday, October 24, at 11 a.m. at Garden City Funeral Home in Missoula.