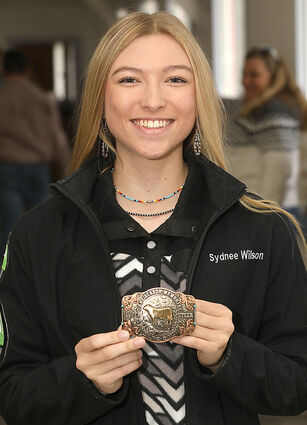 TOP AWARD – Sydnee Wilson of the Whitepine Happy Workers shows her "Super Steer Award," one of the top accolades of the event.

It was the final big 4-H event of the calendar year, but it was filled with excitement from kids receiving accolades for exhibits, interviews and leadership capabilities.

More than 200 people attended 4-H Achievement Day at the Sanders County Fairgrounds pavilion Sunday afternoon. The hour and a half event included a "Poison Dart Frog" game prior to the awards ceremony and a potluck dinner. Almost 100 awards were presented to members of the six 4-H clubs, including two adults, Johnny Thurston and Linda Cook, who received 2022 Volunteer Leaders of the Year certificates.

Cook's daughter, 16-year-old Mikiah Cook of the South Side Sparks club and the 4-H state ambassador officer team president, served as the main speaker for the event and helped announce the winners and hand out awards, along with county ambassadors Melodie Cook, 14, Mackenzie Tulloch, 15, Anna Hafner, 18, and Andrew Wrobleski, 14, all of the South Side Sparks. Each of the club leaders first handed out awards to their members, starting with Taylor Etienne of the Heron-Noxon Explorers, who had two of the club's three members present. Shannon Chojnacky and Rhonda Horner, who head the Trout Creek Mavericks, introduced the 15 members present. Joanne Burk of the Whitepine Happy Workers had six members with her. Jennifer Avilla of the South Side Sparks introduced 25 members. The Hot Springs Wranglers club was represented by Carmen Jackson, who had two 4-H members present. Lacey Scharfe of the Thompson Falls Mountaineers had six members present.

Montana State University Sanders County Extension Agent Juli Thurston felt Achievement Day was a big success. "It is a way to sum up the year recognizing members for their commitment and hard work," said Thurston. The "top" and "overall" awards are for work the kids did for the fair, but they are kept a surprise until Achievement Day, said Thurston. She also said the carcass awards are the results of judging the animals' carcasses after they are processed, which was done after the fair. "The judge is typically another agent in western Montana that has been trained to judge them. They look at fat cover, loin eye area, marbling, etc," she said.

John McNamara of the South Side Sparks walked away with five awards, including Top Junior Environmental & Natural Science Exhibit, the Overall Reserve Champion Environmental & Natural Science Award, the Marsha McDonald Rubino Memorial Award, the Overall Sportsmanship Award in the horse division, and the Conservation Charlie Award, which went to a member with an outstanding conservation-related exhibit.

Sydnee Wilson of the Whitepine Happy Workers collected five awards, including the Steer of Merit Award, the Grand Maternal Champion in the Top Genomic Heifers, Grand Champion in the Beef Carcass Award, the State 4-H Congress Communications Participation, and the Super Steer Award, one of the biggest awards the kids could receive, according to Karen Dwyer, one of the coordinators and a volunteer with the 4-H program for more than 30 years. The Super Steer Award is comprised of five categories: rate of weight gain, market placing, showmanship placing, carcass placing, and carcass grade. "Placing in each category is accessed using a numerical point value of one through ten, ten being the highest. Participants must have a score in all five categories to be eligible," said Thurston. 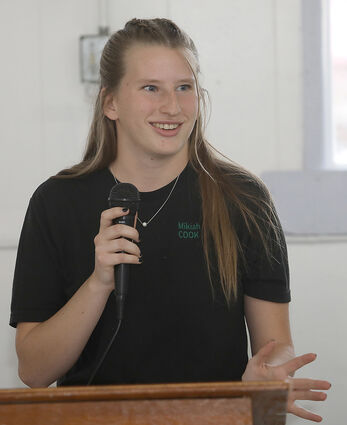 TOP AWARD – As the state's ambassador, Mikiah Cook of the South Side Sparks serves as the main speaker of Achievement Day.

Katelyn Christensen of the Hot Springs Wranglers was not present, but received the Archie McDonald Memorial Sportsman Award, one of the top awards of the year. Thurston said that Christensen succeeded and achieved in her livestock project, being helpful to others and a good sportsman at the fair.