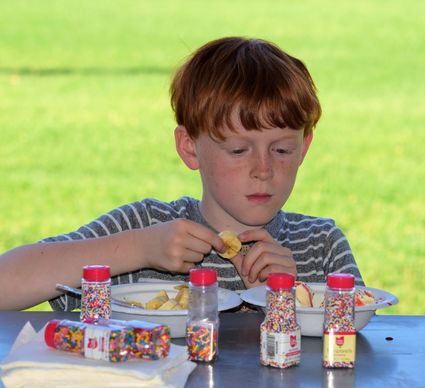 THE FINAL TOUCH – Aodhan Umphrey, a 9-year-old from Mission, puts the final touch on his sundae at the CASA ice cream social and fundraising event. After loading his ice cream with sprinkles galore, he opted for a single slice of banana.

"They work tirelessly, they investigate and figure out what is the best interest for the child,"

said Sanders County Court Appointed Special Advocates (CASA) founder Polly Cavill. She was referencing the advocates who volunteer their time providing services in finding the best fit for children who have been legally removed from their parents because they are victims of abuse or neglect.

The important work of CASA can only continue through grants received at the federal and state levels as well as through philanthropic donations, according to Cavill. This was the reason for Sunday's ice cream social and silent auction taking place. Funds raised will be used to provide the mandatory 30-hour training for both Lake and Sanders Counties' advocates allowing them to speak in court on behalf of the children.

Those in attendance were there to show their support and "raise money to train volunteers to provide the best services they can to kiddos," Cavill commented.

The community certainly stepped up and came forward to support CASA through donations of items sold in a silent auction. Just under 50 items were donated by local businesses and individuals to help support CASA financially. 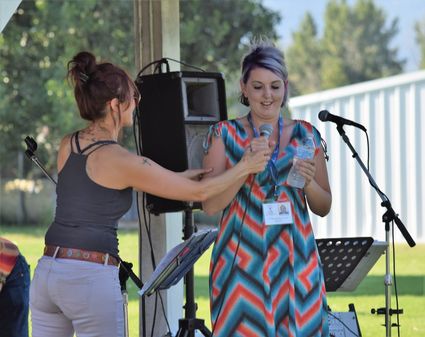 SHARING HER STORY - Polly Cavill passes the mic to Collen Knutson to share why she has become involved in CASA. "I have a heart to help people," Knutson shared.

When the silent auction item sales and donations were tallied, it was announced that $3,600 was raised at the event. CASA is grateful for everyone who supports them so they can in turn help their community.

Advocates apply their skills to "represent the best interest of children that might otherwise be lost to the system," according to CASA. They provide skills and support to help parents become stronger allowing families to be reunited in some cases. If this is not possible, CASA will work to find loving adoptive homes for children.

More information on CASA can be found on their Facebook page, "CASA of Lake & Sanders Counties."