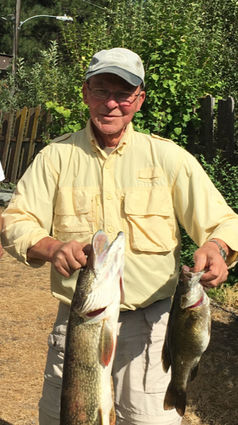 Francis Marion Craig, age 83, passed away peacefully at his home in Thompson Falls, Montana, on the evening of September 4 after fighting a hard battle against re-occurring cancer for the past two years. By his side was his loving wife, Marlene.

Francis was born June 20, 1936, in Auburn, Indiana, to Walter and Marie Craig. He had two older sisters and said "I was the youngest and got away with the most." When he was 12 years old, the family moved from Indiana to Michigan. He loved growing up in Michigan, hunting and fishing all the time.

He attended high school in Newaygo, Michigan, then played college baseball for one year at Ferris Institute (now Ferris State University in Big Rapids). After one year, he told his parents, "Don't waste your money, I'm going to work for Michigan Bell." And that's what he did until he moved to Montana in 1972. He worked for Mountain Bell in Missoula, retiring to Thompson Falls in 1994. He married Marlene Burch in 1994 and they were married for 25 years.

When he was growing up, Francis's favorite holiday was Christmas like all kids. As he got older, he said Thanksgiving was his favorite by far. He said he liked Thanksgiving because of family and friends coming together for a meal and everything was getting back to the way it should be.

Francis was the most generous, loving husband, father, grandfather and great-grandfather. He had 7 kids, 17 grandchildren and 11 great-grandkids. He shared with them all his passion for fishing, hunting, gardening, golf, bowling and wood working. He loved to read and was always willing to help those in need. He had beautiful sky blue eyes, large working hands a loving smile and a wonderful sense of humor.

Francis never met a stranger. He was the fish provider for Thompson Falls. His home and dinner table always had a place for you. He was a member of Our Savior's Lutheran Church in Thompson Falls.

A graveside service will be held Saturday, September 14, at 1 p.m. at the Whitepine Cemetery. A celebration of life will also be held at a later date. Sunset Hills Funeral Home is in charge of arrangements.

He was always so thankful for all the help from the Cancer Network of Sanders County. Memorials in his name may be made to that organization or to TRACS in Thompson Falls.