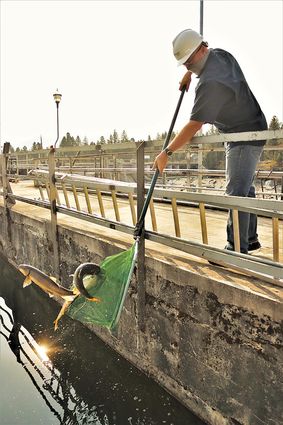 For 10 years, the fish ladder attached to the Thompson Falls dam has been providing a reliable flow of information to researchers on the patterns of fish-travel around and through the dam. Connected by researchers to a network of tag detecting antenna throughout the water system, fish captured at the dam can then be tracked throughout the Clark Fork, then Thompson and beyond.

Since being installed in 2010, the fish ladder has captured over 34,000 fish. According to Jon Hanson, a fish biologist for NorthWestern Energy who helps manage the ladder, “It was the first full-height ladder for bull trout in the state and still is, at that size.” The ladder is 356-feet long and contains more than 48 compartments through which the fish travel. As they move, fish work their way up the ladder through a constant 6 cfs (cubic feet per second) flow of water. There is an added flow at the bottom of the dam, near the entrance of the fish ladder, to entice the fish into the ladder entrance. At the mouth of the ladder, the water ejected from it runs at about 20 cfs, according to Hanson.

The dam was built in 1915 and is owned and operated by NorthWestern Energy. The ladder was added later, in 2010, as a joint project by Montana Fish, Wildlife and Parks (FWP), the Confederated Salish and Kootenai Tribes and NorthWestern Energy. The purpose of the ladder is to aid in the conservation and rescuing of the native bull trout, which is considered a threatened species. The bull trout need to move upriver to spawn and will travel great distances to do so.

“Bull trout have the second lowest thermal optimum of all the fish in North America, just behind the artic char,” said Jason Blakney, fish biologist for FWP. Blakney said this means bull trout need extremely low water temperatures to reach peak growth efficiency and health, contrary to most fish. With that, bull trout are extremely sensitive to water temperature changes. The migratory nature of the bull trout may stem from this need for cold water. Bull trout are well known to move down stream to Lake Pend Oreille, where the water stays cold year-round and reaches extreme depths of over 1,000 feet. This creates a great environment for bull trout to grow to their extremely large size, Blakney added. These fish are then thought to move back up to their home tributaries and breeding grounds, far upstream.

The ladder allows the fish of the river to more easily traverse up and down the dam, as well as to allow researchers to monitor the number and type of fish traversing the dam. Blakney believes that one of the biggest hurdles facing the bull trout, and many of the native fish species, has been the addition of the dams. In many cases, Blakney pointed out, dams can create great habitats for bull trout. However, in the case of the Clark Fork River, they have disrupted that movement pattern and have not created the normal deep cool pockets, which has been a detriment to the fish migrations.

Each fish, depending on the species, takes roughly two hours to move up the ladder. At the top there is a trap that catches the fish for inspection, which is done nearly every weekday morning. FWP staff tag fish and measure them, tracking the fish and stats including weight and length. This information is then immediately updated onto the NorthWestern Energy website that features the dam and the fish ladder. The fish are then released into the reservoir, above the dam. The bull trout, which are tagged, are tracked and picked up by various antennae set up throughout the Thompson River and the Clark Fork.

According to the biologists, nearly 30% of the rainbow and brown trout caught in the dam go up Thompson River. Other common fish caught in the ladder are pikeminnow, small and large mouth bass, sucker fish and even the odd lake trout. Certain species, such at the small mouth bass, are released back below the dam to attempt to protect some of the Thompson River fisheries for trout, and to keep downstream of the dam a productive bass fishery for sportsmen. The introduction of these non-native species has also presented challenges to the bull trout, as pike and bass will prey on the young trout.

This spring, NorthWestern and FWP began to experiment with the flow of the dam near the ladder in order to ascertain if it created more of an attractant to the fish. They replaced panels blocking the flow of water with half, full or quarter panels, which adjusted the amount of water passing through. The idea is that if there is more water flow closer to the ladder, the fish will be more likely to work their way up the dam that way. The panels are changed regularly to get a stable count. The ladder workers tried it for a month in the spring and started again in August. They will keep adjusting the flow until they are satisfied with the results.

The whole process has helped tremendously with understanding the habits of not only the threatened bull trout, but also numerous other varieties of fish that can be found in the Clark Fork River. According to Hanson, the ladder is an incredible tool for information gathering. “It’s cool to have some of that information, to see the influence and reach we can have,” said Hanson.

The ladder allows biologists to learn which species they will catch, at which times of the year, and gives them an idea of where and when fish are moving. The ladder has shown researchers things like the falloff of fish numbers for species like bull trout and pikeminnow, as well as the yearly migrations and types of fish that use the ladder. Since bull trout numbers are at extreme lows for the area, helping them is a great challenge. 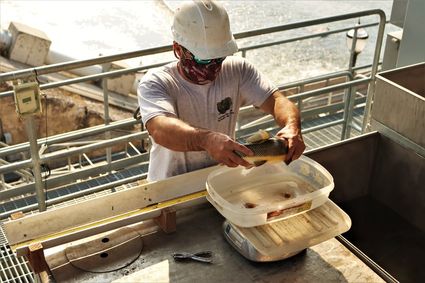 “I wish there were more bull trout to work with,” said Blakney, who mentioned that the low numbers provide limited information on the movements of the bull trout. With more fish, there would be more information to better aid in their conservation. Currently, there are numerous projects in the works across the northwest and the state of Montana to bring back populations of bull trout. One such plan being considered by local researchers is the transportation of mature bull trout downstream from Idaho, back up into the upper streams and rivers to reintroduce mature breeding animals into the population. However, Blakney also said, “There is still a lot we don’t know, and a lot of unanswered questions.”