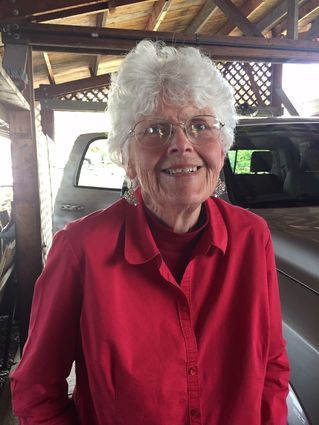 Dolores (Dolly) Evelyn Aldrich Hill Burrese was born April 14, 1933 at the Aldrich ranch on Cherry Creek, just outside of Thompson Falls, the first of four children born to Ray and Evelyn Garrison Aldrich. She died April 9, 2021 at the age of 87.

In Dolly's senior year of high school, she placed third in a statewide shorthand contest. Dolly graduated from Thompson Falls High School in May 1950, while employed in the Sanders County Assessor's Office. In 1952 she worked as a telephone operator in Seattle. In June 1953 she enlisted in the U.S. Navy, from which she was honorably discharged in May 1955. While stationed at NAS Whiting Field, Milton, Florida, she met Paul Hill, a sailor from Utah, and they were married in Lucedale, Mississippi, in January of 1955. From this union two daughters were born: Diane Karen and Ramona Gail. Though Dolly and Paul divorced, they remained friends until his death in 2006.

Many of the working years of her life after the Navy were spent in several offices in the Sanders County courthouse. In addition, she was the secretary at the high school from 1960 until 1962, and at the elementary school from 1972 until 1974. For two years she was the clerk for the driver's license examiners when they came to Thompson Falls. She also enjoyed the time she spent delivering meals on wheels.

Soon after Dolly joined the Thompson Falls Senior Citizens, she decided the group should have a newsletter, and secured funding to print a monthly paper. One day on a whim she made a word-search puzzle using the names of the paid members. That was a hit, so she continued with a new puzzle each month. Many people gave her ideas to use, and some even gave her lists of words. For 10.5 years (126 issues) her TF Senior News was her pet project. She served as secretary and as membership chairman, where her goal was to have 200 paid members. She met her goal.

November 1, 1984, she married Robert Burrese. They spent much time building and remodeling at their home. They also liked to travel and sightsee, from Niagara Falls to southern California to northwest Washington state and a special trip to Victoria, B.C. They attended many school sporting events, and especially liked going to plays. She had collections of angels, bells and hats. The lunches and laughs with the Red Hat ladies were eagerly looked forward to.

If given a chance to live her life over, Dolly would not have changed a thing. At her request, cremation has taken place and there will be no services. Her ashes will be scattered on her favorite mountaintop and on the prairie.

Special thanks to the Clark Fork Valley Hospital Long Term Care staff for the wonderful care they provided.

Death is a black camel that lies down at every door. Sooner or later, you must ride the camel.

She died knowing she was loved.